A crew made up of volunteers and a provincially-funded action team are taking down invasive species in Metchosin parks, one tree at a time.

English holly and European ash are two invasive plants that are found in Metchosin parks, brought to Vancouver Island by humans or birds.

“They have no natural predators — the truly invasive ones — and they can cause great harm to the environment, human health, et cetera,” said Don Hare, executive director of the Coastal Invasive Species Committee. “They have to be removed.”

It wasn’t until a couple of years ago that how quickly the holly was spreading was brought to light. Neil West lives in Metchosin and came across the invasive plant during one of his walks.

“When I first saw holly in the parks, I thought it was cool because I assumed it was native,” he said. “I was seeing it deep in the parks.”

After doing some research and talking to experts, he realized it wasn’t native to the area and knew something had to be done. West brought the issue to the attention of Mark Atherton, chair of Metchosin’s Parks and Trails Advisory Committee. Together, they took on the mission of eradicating the invasive plant.

“We’ve been taking out invasive species in Metchosin Parks by pulling them out with a pullerbear, which is a big leverage tool that you yank them out of the ground [with],” said Atherton.

Over the past two years, the two of them, along with other volunteers, have removed most of the holly using these small tools, but they weren’t able to get to the bigger trees, until now.

The provincial government is investing $12 million into invasive species management to employ and train action teams to take on the work.

It’s part of B.C.’s economic recovery plan that provides employment to those who are unemployed or unable to get jobs due to the COVID-19 pandemic.

“The action teams will be providing the resources to physically remove a lot of the invasives,” said Hare, whose committee sponsors three action teams on the Island, made up of 12 people.

In Metchosin, the crew will go in together, mechanically remove the tree, then paint the targeted herbicide on the stump.

“We have to kill the root or the plant will actually multiply and you’ll get a much greater infestation,” Hare explained. “It will go down into the root, so there’s no opportunity for off target. It’s not going to go anywhere. It’s contained within the stump, goes down and will control the root.”

Without the use of the herbicide to kill the root, Hare added, all of the work they’ve done would go to waste.

After the work the whole crew has done this week and over the past two years, Atherton estimates about 98 per cent of the holly in Metchosin parks will have been eradicated, with just a few stragglers left behind. 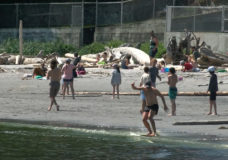 Health experts address concerns as those 12+ become eligible for vaccine in B.C.