Posted: Dec. 15, 2019 5:37PM
CHEK
WatchConservationists say an invasive species is taking over Metchosin's Parks: English holly. They're making it their mission to remove all of the holly from the wild. Jasmine Bala has more.

English holly may be a holiday favourite, but how rapidly it’s spreading is concerning for some conservationists that are trying to preserve the Island’s natural ecosystem.

“It has a significant impact on the natural environment,” said Neil West, coordinator of the Metchosin invasive species cooperative. “It’s not only going to impact plants, it’s going to impact the animals that feed on those plants, so it’s a serious threat.”

It’s an invasive species that is harmful to the environment’s native plants and animals. English holly creates dense thickets, shading out Indigenous plants and altering the soil it roots in. There is no natural predator for holly and it poses a threat to animals by decreasing the amount of natural feed they have.

When West realized just how damaging the invasive plant can be, he made it his mission to remove as much as he could.

“It was increasing in volume much quicker than we were able to pull it, so that’s when we got a group involved,” West said.

He invited the chair of the community’s parks and trails advisory committee, Mark Atherton, for a walk in Metchosin Wilderness Park.

After Atherton saw the problem up close, they took it to the rest of the committee, who passed a motion to remove holly from their Metchosin parks.

“All invasive species shouldn’t be allowed to enter the ecosystem,” Atherton, who is also a retired forester, explained. “So if you can get rid of it, get rid of it.”

And they did, using their hands and tools to uproot the plant. Two Metchosin parks have already been cleaned up but they were unable to remove 14 holly trees that are rooted too deep. Those trees will have to be cut down professionally.

Holly can live up to almost 300 years and be as tall as 50 feet. If it’s not taken care of now, West said the problem is only going to get worse.

“Well in 31 years, if we do nothing — according to the science — there will be 32 times more volume of holly in these parks than there currently is,” he said. “And that is going to be devastating.” 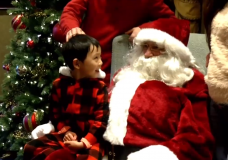