On day four of Victoria Police’s unprecedented shutdown of traffic around the legislature, the James Bay area was devoid of any convoy.

The police checkpoints allowing in residents only were largely unmanned. The only visible trucks were actual work trucks, as the protest convoy which was supposed to arrive in Victoria Sunday still hasn’t shown up.

Convoy coordinator Ron Clark said in a Facebook Live that many participants are worried, that the province or federal government could suddenly create new COVID-19 mandates, which could trap them on Vancouver Island.

“There’s a lot on the other side, but they’re coming over to chat with us first because there’s a lot of rumours and stuff running around out there that all these trucks are going to come over on this island and then get trapped on this island,” said Clark, who claimed to be speaking from a convoy camp somewhere on Vancouver Island.

Clark, who participated in the occupation of Ottawa, is a self-proclaimed ‘freedom advocate’ and says that the convoy protests are his God-given mission. He lives in Alberta and is married with two kids, but right now CHEK News believes he is in Shawnigan Lake trying to set up a home base for the convoy protestors rolling in.

CHEK News was able to confirm that convoy vehicles have been collecting in an area with multiple properties in Shawnigan Lake on Sylvester Road.

One of the addresses is attributed on google maps to a cannabis farm called Alternabis, who say they have nothing to do with the convoy camp.

“We rent property at a total different property,” said owner Bryan Walker in an email to CHEK News.

The convoy campers allege Vancouver Island RCMP have already checked in on them.

“We had a special guest at the gate his morning … It was an RCMP officer,” said Clark on a Facebook live Monday.

Vancouver Island RCMP though was unable to corroborate.

“The RCMP can’t confirm or deny that an investigation is taking place,” said Const. Alex Bérubé.

Clark wouldn’t relay the number of people at their camp right now, only saying more are coming once they can convince their supporters that the island is not a trap.

In the meantime, Clark says they’re working on their plans for the Island.

A slow start to a COVID convoy, that organizers insist will still come.

A previous version of this article stated that Alternabis was the sole address holder/owner of the Shawnigan Lake property. That is not correct, the error has been fixed. 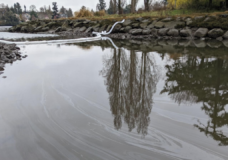 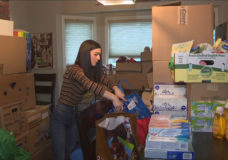