Posted: May 15, 2020 6:46PM
CHEK
WatchThe B.C. government now owns the Comfort Inn on Blanshard, which will be used to house homeless individuals currently on Pandora Avenue and at Topaz Park. Employees at the hotel said they were shocked to learn of the purchase and they're now out of work because of it. Mary Griffin has the details.

Ryan Smith was heading home after clearing out his office on Friday.

He’s the Food and Beverage manager at the Comfort Inn, across the street from Victoria’s Topaz Park. He was laid off mid-March along with all the other staff.

He has now found out his workplace is now a temporary home for the city’s homeless.

“Myself and probably 100-odd employees found out today we didn’t have jobs via social media,” Smith said.

BC Housing is partnering with Our Place Society to operate the building.

But for now, that leaves Smith and his colleagues worried about their futures. There is no word on the status of their jobs.

“I fear for myself, but most importantly, I fear for my staff.  Like, these people have been sitting on unemployment just waiting to get back to work for me.  And now I have to be the person to them that that work they’ve been waiting for is not actually there,” Smith said.

People camping in Topaz Park and along Pandora Street will begin moving this weekend into the hotel, housing up to 70 people. The building will be monitored 24-hours a day, seven days a week by staff from Our Place.

“When there isn’t any structure, like a tent city, bad behaviour is much easier to happen. But we’re going to have structure, programs, and we can have some services for people,” Grant McKenzie, director of communications for Our Place, said.

Rabbi Meir Kaplan of Chabad Centre Vancouver Island said he is thankful the tents at Topaz Park are leaving after two months, as the park could not be used by the community during that time.

“We are very happy that the neighbourhood will turn to be what it was.  But not any less happy that the people, vulnerable people, who are living in the park will have acceptable living conditions every day.  Especially during a time of pandemic,” Kaplan said.

Our Place Society says hiring decisions are up to BC Housing. But BC Housing did not respond to a request for information. 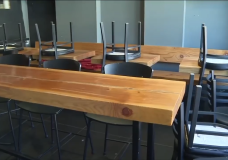 B.C. restaurants get the green light to reopen, but is it worth it? 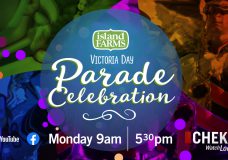