April 20, 2020 updated
CHEK
WatchWhat started as a little fun with the Zoom application's green screen feature has quickly turned into Sybil Verch attempting to raise thousands of dollars for charity.

What does a hockey goalie, astronaut and surfer all have in common?

They’re all part of Sybil Verch’s plan to help those in need.

“I just wanted to bring a little bit of joy to people’s lives right now . . . and maybe have a laugh at my expense.” Verch told CHEK News.

The online video application has surged in popularity since the pandemic, with many businesses using the app as a primary form of communication.

Verch has become quite adept with the web-based technology and has fully embraced the green screen feature to produce a wide variety of background settings.

For example, the green screen allows Verch to superimpose herself as a sky diver, or even a guitarist with the Rolling Stones.

It started as a fun way to add levity to her work meetings, but quickly evolved to a charitable endeavor.

And just a few weeks ago, Verch starting posting different photos on a daily basis to her social media pages.

With just a few clicks of the mouse, people can support national and local food banks.

Verch isn’t asking for any money, instead she is donating her own.

Verch says she hopes to reach her goal of $30,000 but it’s up to the public to like and share her photos. 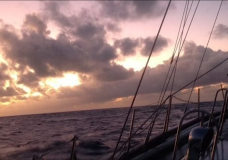