In a time of social distancing, one man is doing it flawlessly.

The 62-year-old is currently on a solo mission to do what no North American has ever done before: complete a non-stop circumnavigation via the five great capes, without the aid of electronic navigational devices.

“I think it just seemed to him to be the hardest most difficult thing to do and he decided he better do it sooner rather than later,” said his sister Leah, who resides in Victoria.

Leah and others have helped provide support in any way they can from back here in B.C. ever since he departed back in October.

But it hasn’t been completely smooth sailing.

While he may be safe from COVID-19, but extreme weather has turned what was supposed to be a six month trip, to now possibly nine.

“He’s looking at 100 kilometre an hour winds, 10 metre waves which are approximately four-times the size of my house, and he’s on a very small boat, so we’re always worried for him.” Leah said.

terHart is not the easiest man to get a hold of these days. He’s currently in the south East Cape, near Tasmania.

However, CHEK reached him on his satellite phone, and despite battling through a rough connection, he was able to share some words of inspiration.

“I’m just hoping to inspire people who have the craziest dreams, because I think adventure is alive and well anywhere on the planet,” terHart said.

And inspire he has.

Students from all over the globe are now following his journey through his blog, or via Instagram

“We’ve got as far as Kenya, Africa. A small rural school has bee emailing us with questions for Bert what it’s like to be in the ocean. New York, Winnipeg, we have about two thousand students following,” said Leah.

If the rest of the journey goes as planned, terHartwill sail back through the Georgia Straight in early July.

Likely changed from the journey, to a much changed world.

Leftovers This is what’s leftover after this morning’s cold front’s final hurrah. These were taken after the swell and wind waves had gone down and I was brave enough to take the iPad into the cockpit. Make no mistake: I am not anxious to see these same conditions any time soon. To say I was not frightened would be untrue. It is OK to be scared s***less. You just can’t be scared witless. Last night when I could not get the Monitor to hold a course and we were being swept by the breaking seas, I could think of nothing else but the forecast increase in swell and wind wave. What then? What options then? I could only think of laying to a drogue or warps p, both poor options as they would cost us time and only serve to expose us on the low following close astern. With Seaburban basically hove to as the Monitor air blade flailed uselessly in the gale force winds, I set an alarm for 90 minutes and tried to sleep. I was woken by a breaking wave smashing our starboard side, shredding part of the nav station companionway dodger and pouring after down the companionway hatch. It was time to do something. Anything but this. Dressed and outside predawn, the cockpit well swirling with water, I realized the Monitor need not steer. I can steer. I didn’t need to steer long, just long enough for the wind to shift to the Southwest. Facing backwards to watch the waves catch us up, I stepped into the well and with water up to my knees, brought Seaburban’s stern to face the wind and whatever swell or wave came our way. Seven hours later, I stepped out and set the Monitor to steer a course due East. I may be many things, but I know I am persistent. And persistence pays. #persistence #finalhurrah # backwardsfacingthewaves #svseaburban #aroundalone #6monthsatsea #sextant #penandpaper #circumnavigation #sailor #sailing #nonstop #5capes #onehandfortheship #occadventuresailing #sailinglovers #adventureisoutthere #occchallengegrant #instasailing #sailboatsofinstagram #captainbert #onemanshow #brave #sailinglife #sea #ocean #sailboats #zhik #sailingaroundtheworld #predictwind Follow my tracks in real-time: https://bit.ly/svseaburban 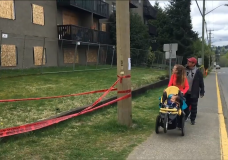 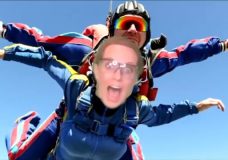