B.C. deficit a ‘staggering’ $12.5B due to COVID-19 pandemic, says finance minister

B.C.’s Finance Minister Carole James was not mincing words about the province’s deficit on Tuesday.

“The economic impacts, to date, have been severe. And that’s certainly demonstrated by the widespread job losses and the impact to businesses,” SHE SAID.

As a result of the fallout from the COVID-19 pandemic, the province now predicting a historic, and staggering, $12.5B dollar deficit.

READ MORE: B.C. government forecasting $12.5B deficit due to COVID-19

The losses to the provincial coffers since the pandemic began include $1.3 billion less in Provincial Sales Tax, $999 million less in Personal Income Tax, $973 million in Corporate Income Tax, almost half a billion in less of the property transfer and property taxes, and $238M less from the Employers’ Health Tax.

On top of that, hundreds of thousands of British Columbians no longer have jobs. The province lost 235,000 jobs between February and June. B.C.’s once enviable unemployment rate of five per cent is now 13 per cent. Young people 15 to 24 are hard hit with a 29 per cent unemployment rate.

The dashboard was launched in May to track the south Vancouver Island’s economic status in the recovery phase of COVID-19.

“The concern for us is the really right now is the uncertainty of the economy right now,” Dallas Gislason, the director of economic development, said.

He said businesses are coming back, but there are indications of a prolonged recession, especially with tourism and travel hit so hard.

“How long will we be in a recessionary period? How hard are we going to be hit? How many businesses are going to be able to survive? How systemic will this unemployment, this high unemployment rate be over the short, medium into long term?” Gislason said of the questions being asked.

There are some signs of recovery. After closing for two months earlier this year, Rebellion Barbershop owner Michael Bodie is happy to be back.  Not all services are back up and running, including beard trimming.  But Bodie hopes that will change in the future.

“Once we’re back to all of our services, I think it’ll pick back up to a reasonable level of business here.”

But the finance minister needs more business to come back.

“The projected numbers are staggering, but they are not without hope,” James said.

The province is not expecting the economy to recover for at least three years. 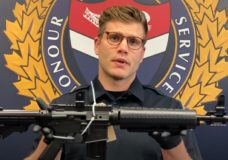