B.C.’s legions say $1.5 million in new provincial aid announced Wednesday is a critical lifeline to survival during the pandemic, after they were excluded from previous government assistance programs.

The funding, which amounts to around $10,000 for each of B.C.’s 145 legions, will flow immediately in the form of non-repayable grants to be spent on things like staff salaries, rent and food and liquor expenses disrupted by recent public health orders that previously banned indoor dining in restaurants during COVID-19, said Economic Recovery Minister Ravi Kahlon.

Legions were not considered eligible for previous circuit breaker financial aid, because they are non-profits. They appealed to Premier John Horgan for help in an April letter.

“We put in the circuit breaker to support businesses that serve food and alcohol and now couldn’t, so were affected, and of course legions do that but were not-for-profits,” said Kahlon. “We knew we needed to find creative ways to support them.”

Legion B.C./Yukon Command president Val MacGregor said she was thrilled the province listened, because legions have been stretched financially to the breaking point during the crisis.

“We are deeply deeply grateful to premier Horgan and the provincial government for this infusion of funding,” she said. “This is the lifeline our branches have needed to continue serving our veterans and doing the good work they do in their communities.”

At the legion’s Trafalgar Pro Patria Branch in Victoria, expenses account for $2,000 per day and the legion has only been able to bring in $1,000 per day by selling boxed lunches to the community, said branch president Patti Stockton. The usual sources of revenue, a gaming license along with food and alcohol sales, have been disrupted by the pandemic, putting at risk the $180,000 the branch returns annually into the community through grants, charities and supports, she said.

“This will keep us going,” said Stockton. “The numbers are getting better with COVID, so we’re hoping maybe by July or mid-July we can open even broader.”

But while the funding might save legions in the short-term, they still face a long-term financial crisis.

Property taxes for the Victoria legion amount to almost $92,000 this year, despite a $25,000 forgiveness by the City of Victoria. That’s going to be difficult to pay with the sharp decline in revenue, and legions across the province have been urging the government to follow the lead of several other provinces and exempt them from municipal property taxes. 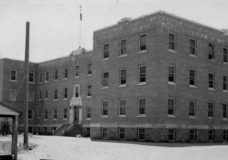 A brief history of Vancouver Island's five residential schools, and the children who died there