Another snowstorm, chance of freezing rain on the horizon as B.C. travel chaos continues

The extreme winter weather is resulting in travel snarls across B.C. and things could get worse with another winter storm expected to add more snow — and possibly freezing rain — into the mix.

An arctic system moved in over Vancouver Island Wednesday that was expected to cause temperatures to plunge to minus 20 overnight for the South Island, prompting an Envrionment Canada arctic outflow warning.

A new winter storm watch issued for most of Vancouver Island and the rest of the South Coast will hit Thursday night until Christmas eve, bringing more heavy snow.

Late Friday, the snow is expected to change to rain on Vancouver Island. Environment Canada says in a winter storm watch that freezing rain could be possible during the transition, leading to more significant impacts on traffic.

The term freezing rain describes precipitation that falls as raindrops but immediately freezes upon impact with the ground and other objects, creating an instant hazard, according to Environment Canada.

“Thursday night we’ll see the snow beginning over Victoria and southern Vancouver Island, and probably continuing through Friday morning. Friday itself looks like a mix of freezing rain, snow and that’s kind of going to be a messy situation,” said Trevor Smith, meteorologist with Environment and Climate Change Canada.

Driving remains a challenge on many roads and transit is also spotty in Victoria, with service not yet fully restored yet on all routes.

And it wasn’t smooth sailing for BC Ferries Wednesday with a few cancellations and delays, one due to a frozen throttle on the Queen of Oak Bay.

Experts like Cathy Scott, owner of Departures Travel, recommends that anyone traveling by air purchase travel insurance before they fly.

“Travel insurance will cover, like ours that we sell anyway, cancellations due to weather conditions. So it’s a wonderful thing to have right now because you can just cancel and re-book down the road,” Scott said.

Meanwhile, almost every passenger at Victoria’s International Airport has a travel nightmare to share.

“They cannot give us a schedule. They just cancelled. There is no flight back to Calgary. And we’ve got to wait, they said maybe three days,” one panicked traveller told CHEK News Wednesday.

“I’m trying to call my son because everything has been cancelled. I don’t know what to do.”

And it’s just going to get busier at the airport, according to Rod Hunchak, spokesperson for Victoria International Airport.

“Tomorrow is supposed to be our busiest travel day during the holidays with upwards of between 5,500 to 6,000 expected to travel through the airport,” Hunchak said.

“And how all these other folks that have been experiencing cancellations in the last day and a half, how they are going to fit into the mix, I can’t even begin to guess.” 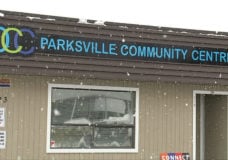 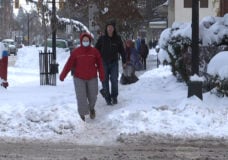 'It's really slippery': Many Victoria roads and sidewalks not fully plowed two days after snow