As Vancouver Island digs out from the snow, many are finding it still difficult to get around with roads not fully plowed for cars and sidewalks, slushy and knee-high.

“I just got stuck here, thanks for helping me out,” one man who needs a scooter to get around told CHEK News.

“Sidewalks in Victoria, not that great,” said another pedestrian. “It seems like they did a better job in View Royal.”

The City of Victoria says its crews have been working around the clock to clear roads and sidewalks.

But two days after the snowfall, drivers are still struggling to make it through major streets. So what’s actually the city responsible for? Victoria breaks down its snow removal into three stages:

But the complaints from those walking in downtown Victoria are clear: Not every sidewalk is being cleared.

“The sidewalks haven’t been cleaned very much so it’s really slippery right now,” said one man.

The city says most sidewalks aren’t its responsibility.

“The city is responsible for clearing areas around sidewalks adjacent to parks and our own buildings,” said Adam Sheffield, acting manager of bylaw services at the City of Victoria.

“We always take a voluntary compliance first approach. We have been out in the downtown core this morning. I had officers up and down Government Street and the collection streets. I think we’ve spoken to 20 businesses to advise them on their obligations and then we’re also contacting those who aren’t operating, the property managers need to clear those, so making a lot of phone calls as well.” 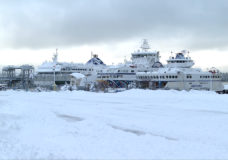 Another snowstorm, chance of freezing rain on the horizon as B.C. travel chaos continues 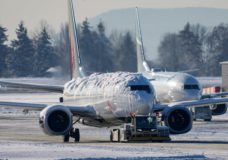 Vancouver and Toronto airports warn of operational impacts due to weather