WATCH: Jeanne Socrates already holds the record as being the oldest woman to sail solo, unassisted, non-stop around the world. But now, she’s looking to be the oldest person, period. As Kori Sidaway tells us, in the past few years she’s seen her fair share of setbacks, but she’s dogged in her determination to get back to the open ocean.

Jeanne Socrates is making the last few repairs before she sets sail on what may be a record-breaking voyage.

“So this will be year number three!” said Socrates.

In those years, Socrates has made three attempts to be the oldest person to sail alone, with no resupplies, no engine, no help, around the world.

But so far she’s been unsuccessful.

Two attempts were cut short when her sailboat was damaged in rough seas. In September of last year, Socrates faced something much more serious.

“I fell off my boat, onto the hard, onto the concrete, 15 feet, you know, I had major injuries,” she said.

Now, fully healed, she’s back on her feet. And at the age of 76, is more dogged than ever.

“I suppose I never say die, if I have something I want to do I won’t give up until it’s done, I’m a pretty determined person,” said Socrates.

She already holds the record as the oldest woman to circumnavigate the globe. This new record attempt to be the oldest person, beating a 71-year-old Japanese man, is really just an excuse to get back to the open ocean.

“It’s like being on top of a mountain you know, you have this wide open sky and space and it’s just wonderful,” said Socrates.

This journey is one she will make, very alone. Aside from the radio, the only things keeping her company are a stuffed teddy and an albatross.

“They sit up there and keep an eye on me,” she said, motioning to the two stuffed animals hanging from the ceiling.

For any sailor, at any age,  sailing around the world is a massive undertaking. But Socrates wouldn’t have it any other way.

“I like to think that I’m a little bit crazy. We should all be a little crazy right?” said Socrates.

“Make life worth living. Why not go for what you want to do? And don’t listen to people that say don’t do it.”

Socrates will untie the lines of her 38-foot sailboat Nereida and set sail Monday morning, hoping to return to Victoria next May with the round-the-world crown. 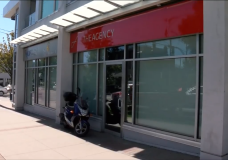 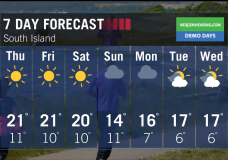 Ed's Forecast: Another sunny day is forecast for Friday but rain makes an appearance by Sunday