Posted: Aug. 30, 2019 5:30PM | Last Updated: Aug. 30, 2019 6:42PM
CHEK
Watch Months after the world’s tallest gnome arrived in Saanich it still isn’t standing. Howard needs council approval to get around a slight height issue. In the meantime, the large gnome is undergoing a much needed makeover.

Just months after the world’s tallest gnome arrived in Saanich its new caretaker is discovering Howard has a height problem.

At a towering 7.91-metres, Howard the gnome is 16 inches taller than the legal height limit in Saanich. As a result, Rob Galey of Galey Farms is seeking a height variance from Saanich council.

“When I started talking to Saanich, they said the best option is to just lower Howard, and I said not a chance, he’s the world’s tallest gnome, he was awarded that title, and I’ll never take his crown away,” Galey says.

Saanich council will discuss the height variance at a meeting on September 9th. There is no indication Saanich will deny the request.

“I can’t speak on behalf of everybody but I think most of council is excited about Howard coming to Saanich,” says Saanich Councillor Colin Plant.

Currently, Howard is undergoing significant improvements which will be revealed to the public this fall.

He says his team has also given the gnome lips and the ability to wave. Howard is also expected to get eyelashes.

Once the makeover is complete, Howard will stand along the farm’s train tracks next to the pumpkin patch waving to riders as they pass by.

The gnome will be rolled out for the fall season but won’t be a permanent addition to the farm. The Agricultural Land Commission only allows Howard to stand on a temporary basis.

Galey was awarded the gnome in March after its owners announced they were searching for a new home.

The large gnome was built in 1998 and had spent 20 years waving to drivers passing through Nanoose Bay but after ownership of the land exchanged, the gnome’s owners were told Howard would be torn down if they didn’t find a new home.

Galey expects to reveal the new and improved gnome to the public in October. 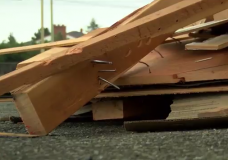 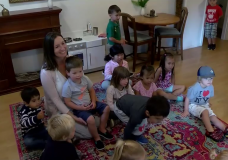