A relative of the woman struck and killed on 3rd Avenue in Port Alberni has identified her as Julia Amos.

“She was a very happy person. She was down to earth really,” said Elisa Jack, who affectionately called her auntie.

A small memorial of candles, a teddy bear and a sign are just meters away from where the collision happened.

Port Alberni RCMP say a woman who was struck and killed by an SUV driver Wednesday evening was not in a marked crosswalk while she was crossing 3rd Avenue.

Police, the BC Ambulance Service and the Port Alberni Fire Department were called to a collision involving a pedestrian on 3rd Avenue near Bute Street at 5:35 p.m.

According to police, a driver in an SUV had been going northbound on 3rd Avenue when they struck the female pedestrian.

“The driver stopped immediately. Bystanders and witnesses rendered first aid to the pedestrian right away but sadly the person was not able to survive her injuries,” said Cpl. Amelia Hayden of Port Alberni RCMP.

Police said the woman had not been in a marked crosswalk when she crossed 3rd Avenue between Bute Street and Burde Street. Police also said the evening had been rainy and dark.

Police said the driver of the SUV remained at the scene and is co-operating with police. The driver was not impaired and not injured in the crash, according to police.

Port Alberni’s mayor says this was the third pedestrian struck in recent weeks and she says many of the city’s roads have been buillt with a focus on vehicles instead of pedestrians.

“As a council, we’re really focused on making improvements for pedestrian safety around the community and I think given the last couple of weeks we’re going to be expediting those conversations,” said Sharie Minions.

But Minions said the day should be focused on supporting those impacted by this tragedy.

An RCMP Collision Reconstructionist and the BC Coroner Service were at the scene and the road was closed to traffic for several hours Wednesday night.

The crash is still under investigation. Anyone who witnessed the collision and has not spoken to police is asked to call Port Alberni RCMP at 250-723-2424. 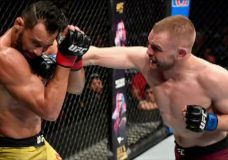 "His tenacity is paying off": Victoria MMA fighter returns home to inspire others