Posted: Jul. 1, 2019 6:15PM | Last Updated: Jul. 2, 2019 4:54PM
CHEK
WatchWolves are rarely seen on the east side of Vancouver Island but an employee at Painter's Lodge in Campbell River videotaped one swimming to shore Saturday morning.

Sharon Herbin has lived in Campbell River her entire life and works at Painters Lodge where on Saturday morning a co-worker spotted something swimming towards the shore.

“It was about a third of the way from the shoreline here and we all figured it was a bear, rare to begin with and still really cool to see,” said Herbin.

But they soon realized it was a wolf.

“We’re used to seeing orcas and humpbacks, porpoises and dolphins from here, but that, I’ve never ever seen before,” she added.

The wolf appears to have swum about 2.5 kilometres from Gowlland Island, which is just off Quadra Island, through very swift moving turbulent water.

“Apparently it’s a black wolf which is really rare,” said Herbin. “Apparently they’re on Gowlland Island over there right beside April Point and we’re just so amazed by it.”

Wolves on Vancouver Island are elusive and more commonly known to live on the north and west island, but they are rarely seen swimming along the east coast.

This particular wolf even had a tag-along. A seal was seen following it to shore.

“We’re going, well this is not a normal relationship I’m sure, to see a seal and a bear together and then, it’s a seal and a wolf? Really?” she said.

The wolf exited the water and was seen running up the beach and disappearing into a green space next to the lodge. 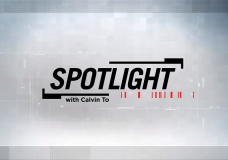 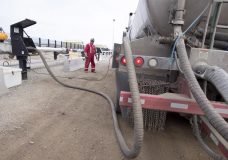