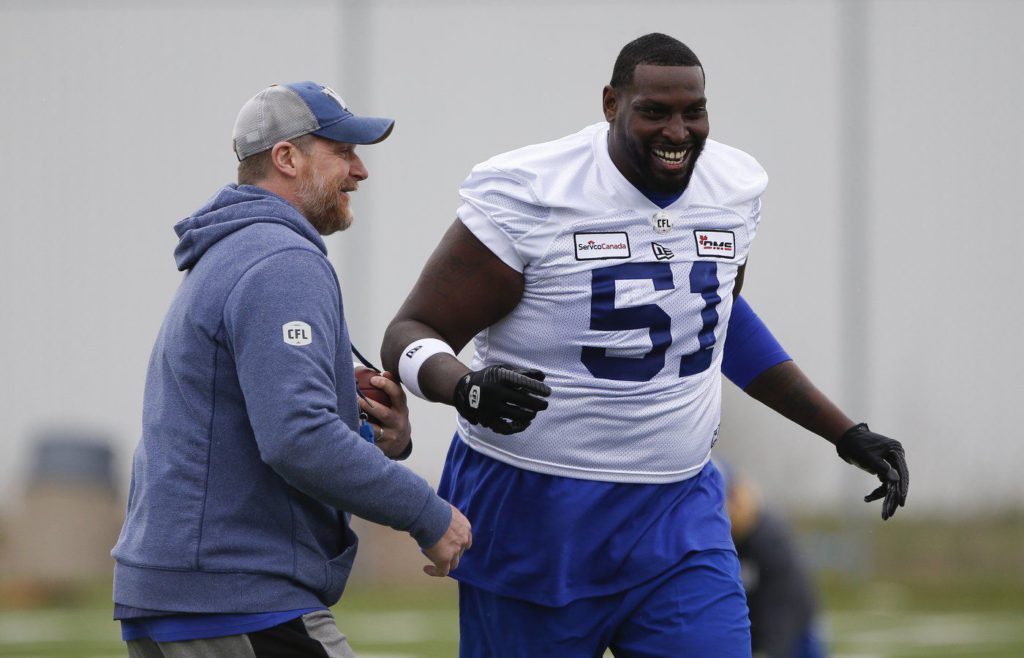 Jermarcus Hardrick is going to ensure his helmet is buckled on tight when the Winnipeg Blue Bombers host the Edmonton Elks on Saturday.

Even though the 13-2 Bombers are favoured to beat the 4-11 Elks, the veteran offensive lineman predicts a battle with an outcome that isn’t a given.

“Any time you face a Chris Jones team, you’ve got to get ready for a fight, and I’m talking street fight,” Hardrick said after Friday’s walk-through, referring to Edmonton’s head coach and general manager.

“That’s one of the things you look forward to all season. You don’t look at the records when you face a Chris Jones-led team. There are going to be some big bodies, there’s going to be some guys who’ve got some athleticism and they’re going to come for a street fight. That’s usually the fun games.”

The Elks could be lining up knowing they’re officially out of the CFL playoff picture if the Saskatchewan Roughriders (6-9) defeat the Hamilton Tiger-Cats in Friday night’s game.

“We’re aware of all that. I mean, it doesn’t take a genius to figure that one out,” Jones said.

“We know we put ourselves in this position and it’s unfortunate, but that’s the position that we’re in and all we can control is what we can control and show up and play these football games and play as hard as we possibly can.

“The organization is paying us to do a job and we intend on doing it to the best of our ability.”

If the Bombers beat Edmonton and the B.C. Lions (10-4) lose to Toronto in the earlier game Saturday, Winnipeg will clinch first place in the West Division for the second season in a row.

Bombers quarterback Zach Collaros expects to feel some pressure from a physical Edmonton defence and said the visitors’ skills have to be respected despite their record.

Edmonton lost 24-10 at home against the Bombers on July 22, a strange game in which Collaros only completed seven of 16 passes with two touchdowns and a pair of interceptions.

Elks quarterback Taylor Cornelius still kind of shakes his head at that stat and outcome, but notes his team is different since that game.

“We’ve got four or five guys remaining on offence due to injuries or whatever the case may be, but we feel confident in how we’ve been playing these past few weeks,” he said.

“We haven’t gotten the results we want, but it’s trending up for sure.”

The Elks will have a new slotback in their receiving corps when Lucky Jackson replaces Kenny Lawler, who recently had shoulder surgery. Jackson was signed to the practice roster on Sept. 13.

The Bombers also have a new face lining up at defensive end. Keion Adams was signed to the practice roster last week after getting cut by Saskatchewan. Veteran DE Jackson Jeffcoat is out with an injury and DE Cedric Wilcot II was traded to Hamilton Tuesday for defensive back Alden Darby Jr.

ROOKIE ON A ROLL: Bombers receiver Dalton Schoen set a franchise record last week for touchdowns by a rookie with 11, which places him fifth in the CFL record book. He could bypass Curtis Mayfield (Ottawa), who’s in fourth with 12 TDs in 1994, and Hugh Oldham (Vegas) who had 13 in 1970.

HITTING THE END ZONE: Winnipeg receiver Nic Demski has scored at least one TD in five straight games, surpassing his previous streak of three games in 2019. The last Bomber to score in six straight games was Charles Roberts in 2006.

SLOW STARTS: The Elks haven’t led after the first quarter in any of their last nine games, and only accomplished that in two games this season. 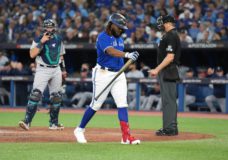 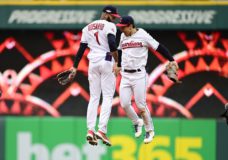