Posted: May 31, 2021 6:23PM
Vancouver Island Whale Watch
Watch A wild, and what could be first of its kind battle in the waters off Nanaimo, has whale watchers buzzing. Skye Ryan has more.

A Vancouver Island Whale Watch crew set out on a search Monday, worried for a humpback mother and her calf that they last saw Saturday off Nanaimo’s Neck Point.

“Hopefully we will see the calf alive as well. But for now, a lot of speculation about it,” said Vancouver Island Whale Watch’s Rodrigo Menezes.

The two humpbacks haven’t been seen since a wild video was recorded by sailor Darcy Irwin on Saturday night. According to witnesses, three pods of transient orcas, the T100, T123s and T46Bs former a bigger group of 13 whales and moved in on the humpback mom and her calf around dinner time.

The video shows bodies slamming against the water over an elapsed time of more than 30 minutes.

Sailors who told CHEK News they had been admiring the mom and calf just before the orcas moved in are overheard saying they think the orcas just killed the calf.

“When you get three pods and you have two very large males there, it does make it a possibility,” said Vancouver Island Whale Watch’s Rebeka Pirker.

“That video does suggest that there could have been a predation but we have no proof one way or another,” said Vancouver Island Whale Watch’s Cheyenne Brewster.

“So we’re hoping to find the whales that were spotted that night to find out one way or another.”

According to UBC professor and Director of the Institute for Oceans and Fisheries Andrew Trites, it would be a huge discovery if the orcas did kill the humpback.

“This is potentially the first documented case of humpbacks being attacked in the Salish Sea and so it is big news,” said Trites.

It would be the first in the Salish Sea in likely 100 years, according to Trites. Humpbacks have been slowly returning to the Salish Sea over the last 15 years, since being killed off by a whaling operation in Nanaimo in 1908.

Trites said the humpback mother would have defended her calf furiously though, and that’s not visible in the video, suggesting the orcas made their runs at it, but likely didn’t get the baby.

“Perhaps they were just testing the waters and saw an opportunity,” said Trites.

It’s a win for the humpbacks, who are likely now bearing the scars of the attack, and that whale watchers were still looking for late Monday. 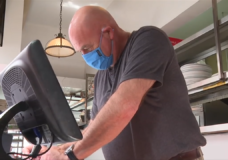 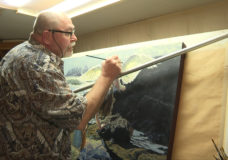