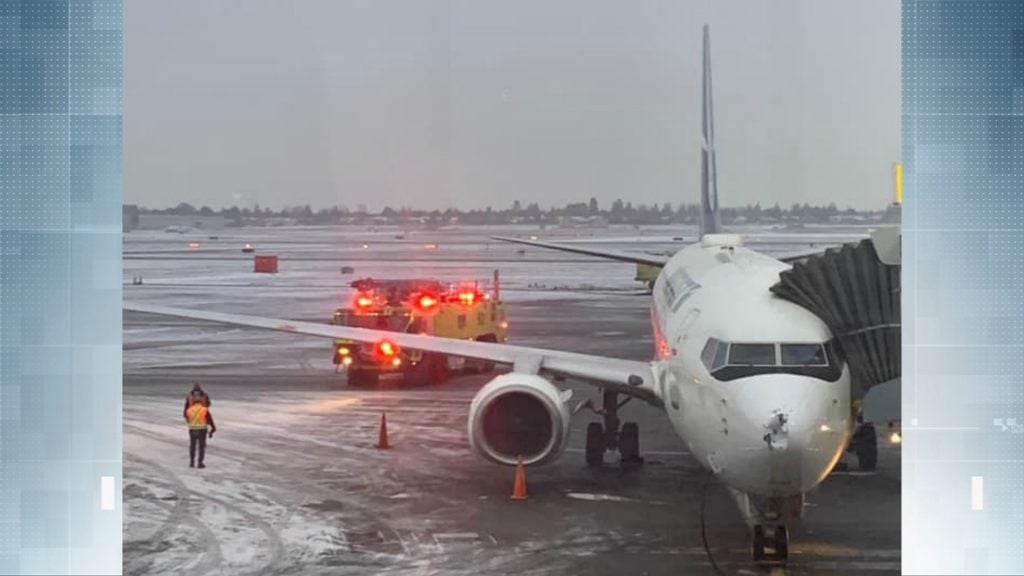 CHEK
WatchA WestJet flight from Calgary to Victoria Tuesday morning was diverted to Vancouver, after the aircraft hit a flock of birds while trying to land at Victoria International Airport.

A WestJet flight from Calgary to Victoria Tuesday morning was diverted to Vancouver after the aircraft hit a flock of birds while trying to land at Victoria International Airport.

The airline says flight 209 suffered a bird strike while inbound to Victoria. It diverted to Vancouver International Airport due to the availability of maintenance resources.

The Boeing 737-800 reportedly hit a flock of birds, smashing the aircraft’s nose cone in.

As you’d expect, passengers were shaken up. “We kinda you know, took deep breaths and going what’s going to happen to us,” said passenger Brad Weed.

“I thought you know if we do go down, I want to live, like if there’s we can do to help get through this I will,” said another passenger Stuart Hay.

Penelope Tsumara just happened to be driving along West Saanich Road as the plane was coming through. “I look up and I see a flock of birds and West Jet and I was just like oh my god and then all of a sudden I hear, with the radio on I hear pop, pop, pop, bang, bang, bang,” Tsumara said.

Victoria airport says roughly 20-30 bird strikes occur in the area per year, but this was an extreme case, and add their wildlife control policy is evaluated on a consistent basis.

“It is reviewed annually by the Airport. And it involves identifying risks and putting in measures to minimize wildlife interactions with aircraft,” said Spokesperson Rod Hunchak.

Officials say the flight landed normally and the aircraft has now been removed from service for required safety inspections.

Flightaware.com shows the aircraft approaching Victoria International Airport, flying over the airfield, and then diverting north to Vancouver.

“We sincerely apologize for the interruption to our guests travel plans and any inconvenience this may have caused,” said WestJet spokesperson Morgan Bell in a statement.

“All guests are being re-accommodated throughout the remainder of the day on the next available flights.”