Their union says the company wants numerous concessions that are unacceptable and workers are ready to strike as long as it takes.

The United Steelworkers (USW) union wants WFP to know it’s not willing to settle despite nearly 3,000 of its members being on the picket line for close to three months.

The union says WFP wants its members to accept 24 concessions despite the company making record profits in recent years.

And the Steelworkers says Western Forest Products is also reacting to forest industry reforms brought in by the Horgan government.

“It’s a capital strike and that capital strike is being taken on by Western Forest Products, Interfor and Canfor and all the big companies,” said Al Bieska, President of Steelworkers Local 2009.

“Their agenda is clear. They are rebelling against the policies of this government.”

But in a statement today WFP says “…our proposal provides for wage increases and many benefit enhancements aligned with the rest of the forest sector while also taking into consideration the need to maintain our competitiveness given the cost pressures facing the coastal forest industry.”

The union is warning workers to be ready for a long strike and those attending say while being on the picket line is stressful, they’re ready to wait the company out.

“The union has been saying one day longer and that’s our plan. We’re not willing to give up what we fought long and hard for,” said Stephanie Empy. She and her husband both work at the Nanaimo WFP mill at Duke Point.

“I’ve been through a few of them in the past so hopefully Western can smarten up and get to the table and give us a proper contract,” said Keary Henning, who works for WFP in Cowichan Bay.

The union says already it’s planning other rallies in affected communities with no end to this strike in sight. 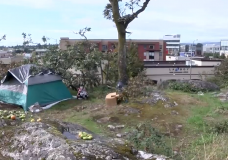