Posted: Sep. 26, 2019 6:00PM
CHEK
WatchGood evening. Every day, thousands of vehicles pass by Saanich's latest homeless encampment. More than half a dozen tenters are living on an island boulevard between Vernon and Blanshard Streets near Uptown mall. They say they feel safer there than anywhere in downtown Victoria. Mary Griffin reports.

Tents dot the landscape on land located on the land between two busy lanes on Blanshard Street, right before the Uptown Shopping Centre, in Saanich.

It’s not a campground but Greater Victoria’s latest homeless encampment.

Thirty-eight-year-old James Cochrane pitched his tent here about a week ago and he’s happy to stay as long as he can.

“It’s a nice little camping spot and they’ve been able to camp here like overnight without having to take the tent down and go away. Like most campgrounds, you have to get up at a certain time and leave,” Cochrane said.

But convenience isn’t the only reason he’s here. Cochrane says living on the street in downtown Victoria is just too dangerous.

Island Health issued an overdose alert on Wednesday, specifically, for the 900-block of Pandora after eight overdoses in 24 hours in and outside of the safe consumption site. A shortage of shelter beds is contributing to increasing chaos on the street, according to Grant McKenzie with Our Place Society.

“Victoria is one of the few cities across Canada that doesn’t have enough shelter space for everybody. All the other major cities have opened large shelters so that people can get in and out of the cold every night. We don’t have that,” McKenzie said.

This is not the first time for a homeless encampment in Saanich, Last fall, after months of tension, campers moved out of Regina Park. At its height, more than four dozen tents lined up next to a residential neighbourhood.  The Regina Park campers were offered housing by BC Housing.  Some took up the offer to relocate to facilities such as the Cool Aid operated Rock Bay Landing, but the majority refused.

“If every municipality in the Capital Region donated one parcel of land for a place that we could house 40 to 50, build that modular housing, with 24/7 supports, we could get most of the people off the streets,” McKenzie said.

This property is owned by the Ministry of Transportation, so municipal bylaws regarding overnight camping don’t apply.  Saanich police are encouraging the campers to move on, but they say they have nowhere to go.

A statement from the Ministry of Transportation and Infrastructure states that it is aware of a small encampment located on ministry right-of-way on Highway 17, just south of Uptown.  The ministry has made the District of Saanich and Saanich Police aware.  The ministry continues to monitor the encampment. 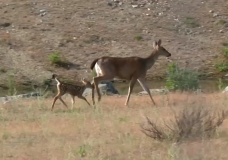 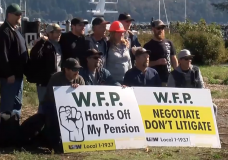