‘We will not forget:’ Thousands attend funeral for fallen Fredericton officers 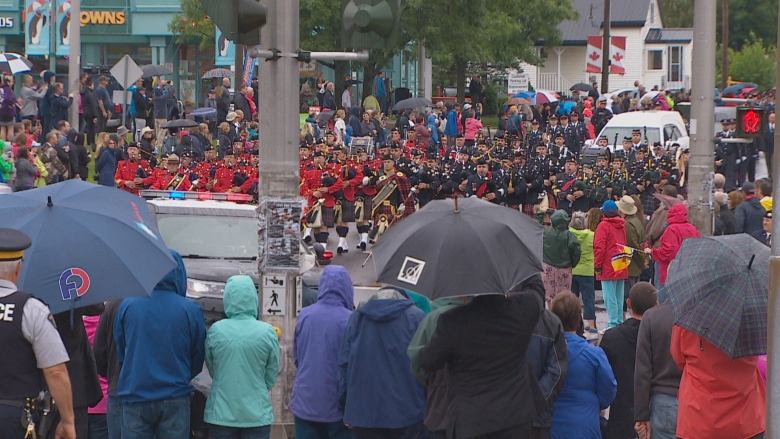 According to the city of Fredericton 1,500 first responders from jurisdictions all over the country marched behind the hearses of the two officers. (Kayla Hounsell/CBC)

An emotional afternoon in Fredericton has drawn to a close, although last Friday’s tragedy still hangs over the New Brunswick capital after a regimental funeral was held for two constables killed in the line of duty.

Loved ones, colleagues and dignitaries spoke at the ceremony, and a common theme was woven into every speech: the kindness and compassion of the fallen officers.

Fredericton Police Chief Leanne Fitch’s voice shook as she described her time working with Costello and Burns, who were killed last Friday in a shooting that also left two civilians dead.

“When we sign up to serve and protect our city, we are committing our entire life’s work to this service,” Fitch said, adding that the two officers died as heroes.

“Their deaths have created a ripple effect that stretches out as far as the ocean is deep.”

Burns’s husband fought back tears as he delivered a powerful speech in which he asked the surviving Fredericton officers not to feel any guilt about his wife’s death.

“I want each and every one of you to know that she is at peace, and knows that you did everything you could to protect her,” he said.

“Don’t burden yourself with the ‘why,’ because you won’t find the answer.”

Burns asked that those in attendance pay their respects to the two civilian victims, Bobbie Lee Wright and Donnie Robichaud, as well.

“Their families are grieving no less, and their lives are just as important,” he said.

Burns’s tie and pocket square were yellow, his wife’s favourite colour, and matched the yellow roses placed on top of her casket.

Greg Morris, a family friend of Costello, said the fallen officer took great pride in his work and had described being a police officer as his lifelong passion.

Morris said Costello was a kind and compassionate friend who loved his mother, once spending days by her side while she was in the hospital.

Costello also loved basketball, Morris said, adding that while his friend was never the most skilled player, he was the most selfless and was always willing to do anything for his team.

But the most important thing in his life was his family, he said.

Addressing Costello’s daughters, Morris said, “Kassie and Kaitlyn, your dad would be so proud of the remarkable women you’re becoming today…. He loved you both very much.”

Roy-Vienneau said she was fortunate to have met both Burns and Costello, and she was struck by their passion for their work.

She said Saturday’s ceremony was both a time of great sadness and a time to honour all police officers and first responders.

“The men and women in police uniforms constantly demonstrate the highest levels of courage, resourcefulness, initiative, and willingness to go above and beyond, often putting themselves in harm’s way,” Roy-Vienneau said.

“While we all wish for a different outcome, I promise we will not forget the sacrifices made in the line of duty.”

At the beginning of the ceremony, officers laid the caps and belts of the fallen constables on top of their caskets, which were covered by Canadian flags, next to the roses placed there by family members.

The flags were later carefully folded and given to Costello and Burns’s families.

The service began with a heart-wrenching bilingual rendition of “O Canada” by award-winning singer Measha Brueggergosman, a Fredericton native. That was followed by a smudging ceremony with sweetgrass, performed by St. Mary’s First Nation Elder Imelda Perley, to honour the officers’ transition from “Earth walk to spirit walk.”

Before the funeral began, 1,500 officers and first responders marched through the streets of Fredericton for a funeral procession, while hundreds of people lined the route.

Rain poured from the sky during the parade, mirroring the gloom that has taken over the city of nearly 60,000 people.

“The rain in our city today represents the tears of sadness and grief that flow from our hearts brought about by the terrible and senseless loss of these two heroes we dearly love,” Fredericton police chaplain Rev. Verner Drost said at the ceremony.

The lives of the two civilian victims were also honoured this week by their families and friends.

A public visitation was held Wednesday evening for Wright at a funeral home near Woodstock, N.B., although her obituary said there would be no funeral service by request and her internment would be held at a later date.

Similarly, no funeral was held for Robichaud.

His widow, Melissa Robichaud, told The Canadian Press that he had requested to be cremated and that she planned to scatter his ashes Thursday evening along a strip of road the avid motorcyclist had often biked along.

Forty-eight-year-old Matthew Vincent Raymond has been charged with four counts of first-degree murder in the shooting, and is set to appear in court on Aug. 27.

On Friday, a judge lifted a publication ban that had been imposed on court documents revealing details about how the deadly attack unfolded.

Monday’s ban came hours after several media outlets had already reported on what the documents contained.

The now public documents say the accused gunman was wounded as he allegedly exchanged gunfire with another officer from his apartment window.

Story by Kevin Bissett, The Canadian Press. With files from Alex Cooke in Halifax. 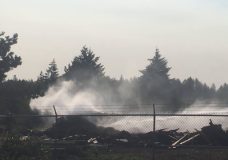 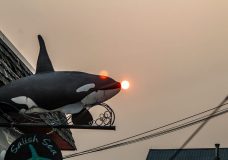 Smoky skies bulletin expanded to include all regions of Vancouver Island