Mutual aid was called to a fire that broke out Friday night at the Harmac Pacific mill.

Martin Drakeley, Nanaimo Fire Rescue assistant fire chief, said they were called to the fire at around 11:30 p.m. When they arrived, they discovered a large pile of wooden pallets on fire, along with a large pile of wood chips and another of shaved wood.

Drakeley said within a couple of hours, winds had started to blow south off the water and embers were going toward trees. The North Cedar Fire Department and the Cranberry Fire Department then responded to the fire as only a couple of Nanaimo firefighters could leave the main fire. They were able to stop the fire from spreading into the trees.

Firefighters left the main fire at 6:30 a.m. Saturday while Harmac emergency crews stayed to spray water on the piles, which were still smouldering.

“They were spraying water until an excavator could dig and get to the sparks,” Drakeley said.

No one was injured in the fire. The cause is under investigation. 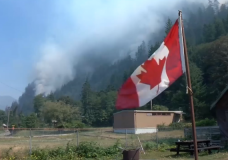 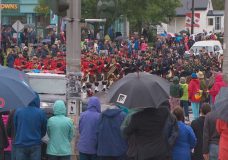 'We will not forget:' Thousands attend funeral for fallen Fredericton officers