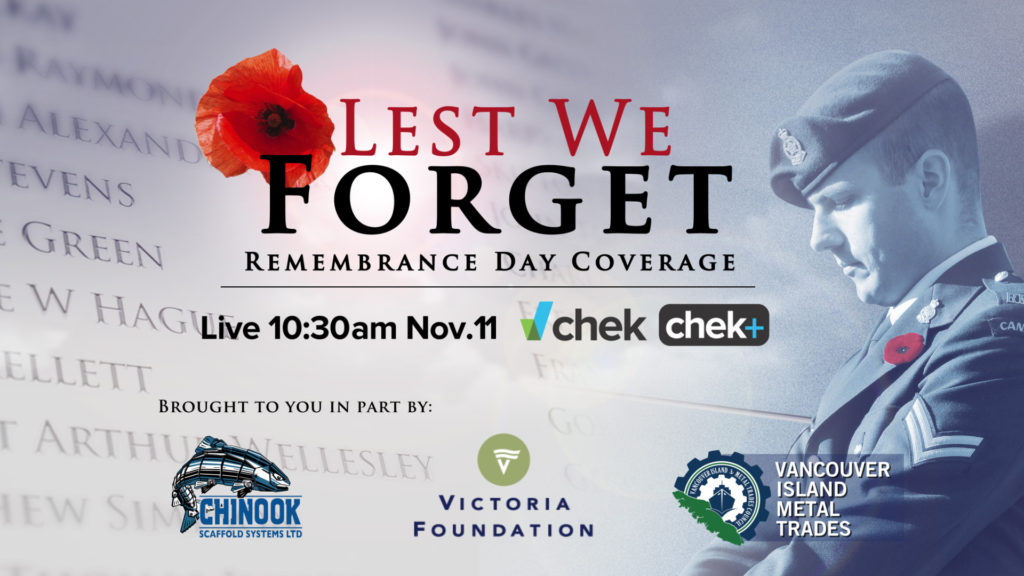 Canadians are paying respects to the country’s war dead at sombre Remembrance Day ceremonies across the country, including in downtown Victoria.

The ceremony, organized by the Victoria Remembrance Day Committee Poppy Fund, starts at 10:30 a.m. and will be livestreamed on this page and the CHEK+ app with host Joe Perkins and guests, including Cmdre David Mazur and S3 Mohammed Al-Hakeem.

In B.C.’s capital today, Canadian flags will be lowered to half-mast at city hall and all city buildings to honour those who have served our country, the City of Victoria says.

Roads around the Legislature, including Government Street from Fort to Superior streets, Belleville Street from Menzies to Douglas streets, and Wharf Street from Fort through Humbold streets to Gordon Street, will be closed from 9:30 a.m. until 12:30 p.m., the city adds.

Vehicle parking is free at city parkades and on-street meters today, according to city officials, who note city hall and Crystal Pool and Fitness Centre, among other city facilities, are closed to mark the holiday.

In neighbouring Esquimalt, the public is invited to join members of the Royal Canadian Navy in a Remembrance Day parade and ceremony starting at 10 a.m. at the Tudor House (Admirals and Esquimalt roads) and ending at the cenotaph in Memorial Park, 1200 Esquimalt Rd.

Elsewhere on Vancouver Island, CHEK’s Kendall Hanson is broadcasting live from Nanaimo where a ceremony at the Dallas Square Park cenotaph (85 Front St.) kicks off at 10:55 a.m.

Flypasts by Royal Canadian Air Force aircraft will also occur in other communities across the Island today, including Sidney, Courtenay, Comox, Cumberland and Campbell River.

If you can't make it to a #RemembranceDay event, we'll have live coverage of the ceremony at the Legislative Cenotaph beginning at 10:30am. #LestWeForget pic.twitter.com/ww6bSxM3SC

In Ottawa, meanwhile, thousands of people wearing poppies stood in silence as cannons boomed and military aircraft flew past the National War Memorial as the clock on the Peace Tower struck 11 a.m.

Navy Capt. Bonita Mason said a prayer during the ceremony and noted the ongoing war in Ukraine and the importance of military families, while also calling on Canadians to set aside their divisions and embrace reconciliation and dialogue.

“In a world fraught with struggle and instability, where war continues to rage in Ukraine, we gather to affirm with one another our determination to remove the barriers of division in a spirit of reconciliation,” Mason said.

“We seek dialogue with one another in all spheres: social, political and religious. That in doing so, we may achieve a lasting peace. May we all strive to continue our efforts to build a better world.”

The national ceremony also marked the 80th anniversary of the ill-fated attack on Dieppe, in which 916 Canadians died in a single day. 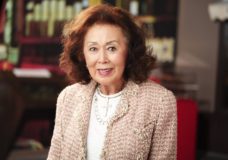 Ex-nurse donates $3.8M for health unit in Downtown Eastside where she worked in 1950s 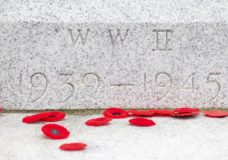