Adele Jenkins is in grade nine at Belmont Secondary and she’s learned an important lesson in giving back.

“I thought that was really cool that I could help people by donating to them,” Adele says. “I think that was a really cool thing I didn’t think about before.”

Adele was part of the Victoria Foundation’s Vital Youth program, aimed at engaging young people and teaching them about the importance of philanthropy.

“We work with 10 schools currently in the Greater Victoria area and it allows students to have a chance to connect with and learn about issues facing their community,” explains Hayleigh Chafe of the Victoria Foundation.

This is the 19th year for the initiative.

Each school is given $3,000 and the students taking part get to decide who to help.

“Something students really like to do is go meet the potential grantees or folks in their community doing good work and I think it exposes them to the great work our non-profits are doing here in this region,” Hayley  says.

Adele’s group decided to give half of their money to the Victoria Hand Project.

“We wanted to donate to smaller, lesser-known charities so we found the Victoria Hand Project,” Adele says. “They make prosthetic arms for people at a lower cost so people can afford them and I think that’s wonderful.”

The rest went to the Victoria Child Abuse Prevention and Counselling Centre.

“I definitely encourage other people to get into it because it was one of the best feelings once you’ve donated the money and once you knew you were helping people,” says Adele.

“I think it truly inspires them to be life-long givers in whatever way that means —their time, money if that’s possible, and just their skills and gifts they bring into the world,” Hayley adds.

It’s definitely inspired 14-year-old Adele, who says her eyes were opened to all the people who need help in our community.

“I love seeing people smile and if can do that for many different people, I think that makes the whole world of difference,” Adele. “It just kind of makes my day knowing I did something that helps other people.”

Vital Signs Survey: What does community mean to you? 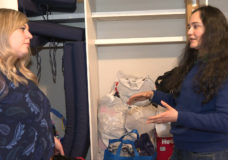 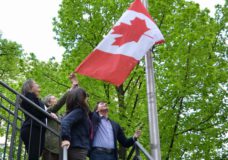