OTTAWA — The ghosts of Indigenous protests past have hovered over Prime Minister Justin Trudeau as his government struggles to bring a peaceful end to blockades that have disrupted traffic on rail lines and other major transportation routes across the country for more than two weeks.

Those are just some of the names that evoke grim memories of violent confrontations that resulted from attempts to forcibly shut down Indigenous protests.

Even as he called Friday for police to enforce injunctions and bring down the barricades, Trudeau stressed the need for a peaceful resolution and worried about the potential for another Oka — the 78-day standoff in Quebec in 1990 that left one police officer dead, an Indigenous teenager badly wounded and the relationship between Mohawks and non-Indigenous locals in tatters.

“History has taught us how governments can make matters worse if they fail to exhaust all other possible avenues,” Trudeau said.

The lesson has been repeated countless times over the past 60 years and will continue to be repeated so long as federal and provincial governments fail to resolve Indigenous land claims, in the view of Hayden King, executive director of the Yellowhead Institute, a First Nations-led think tank at Ryerson University.

“And now we’re at a point in Canadian history where all those cases (of violent confrontation) … they’ve all culminated to the point that we’re at now where there isn’t a clear avenue to address this in a climate of so-called reconciliation.”

At least initially, in resisting pressure for immediate enforcement of injunctions and calling for patience, Trudeau struck a markedly different tone than bellicose government leaders faced with similar circumstances in the past.

Michael Coyle, a Western University law professor who specializes in Indigenous rights and dispute resolution, says that was the right approach and “much more likely to lead to a mutually agreed and respectful outcome.”

But under pressure from business leaders, premiers and the public, Trudeau adopted a more assertive tone Friday, insisting the barricade must come down.

While the prime minister insisted he wasn’t directing the police, King says Trudeau was signalling to police that the time had come to move in. King believes, however, that police forces are “less susceptible” to that kind of pressure from political leaders than in the past.

Coyle too, believes police and some politicians have learned from past mistakes that the use of force risks lives, can inflame an already tense situation and doesn’t necessarily lead to “an enduring peaceful outcome.” Police have also learned that enforcing the rule of law includes protecting Indigenous rights, he says.

Indeed, so far, police across the country have shown considerably more restraint and sensitivity than was exhibited by the Ontario Provincial Police in 1995 when members of the Stony Creek First Nation occupied land appropriated by the federal government for a military training camp and the nearby Ipperwash Provincial Park.

Under pressure from the provincial government to quickly remove the protesters from the park and acting on unverified reports of gunfire, dozens of heavily armed OPP officers in riot gear marched towards the protesters at night. In the fear and confusion that followed, Indigenous protester Dudley George was shot and killed.

An inquiry into the Ipperwash crisis was highly critical of the OPP for failing to educate officers on Indigenous rights or to discipline some of the overtly racist officers involved. It also criticized police and the government for not trying first to communicate with protesters or negotiate an end to the park occupation.

In the current crisis, Trudeau has expressed confidence in the “professionalism” of the police to deal with blockades that sprung up across the country in solidarity with Wet’suwet’en hereditary chiefs opposed to a natural gas pipeline in northern British Columbia. And he has categorically ruled out deploying the military.

Back in 1990, some 800 soldiers wound up facing off against Indigenous protesters after a botched police raid to remove a blockade — set up by Kanesatake Mohawk warriors to protest expansion of a golf course on disputed land that included a Mohawk burial ground — left one officer dead.

The raid inflamed tensions, prompting neighbouring Kahnawake and Akwesasne Mohawks to erect more barricades that shut down highways and the Mercier bridge, cutting off residents in Montreal’s southern suburbs from the island of Montreal. Some infuriated local residents retaliated by throwing stones at cars taking the elderly, women and children out of the Kanesatake reserve.

While Oka and Ipperwash were the deadliest, there have been other instances when attempts to forcibly end Indigenous protests have turned ugly. Here’s a summary of a few:

Mohawks from the Six Nations of the Grand River occupied a construction site for a new subdivision on disputed land in this community southwest of Hamilton. Local residents accused the Mohawks of harassment, intimidation and sabotage and they accused the OPP of doing nothing to protect them. The occupation lasted 52 days before the OPP launched a raid and arrested 16 people. Several police officers were injured and property destroyed. In solidarity, Mohawks of Tyendinaga blocked railroad tracks near Belleville, just as they are doing now in support of the Wet’suwet’en.

A rancher tried to kick a small group of First Nations Sundancers off his property — which they claimed was unceded Secwepemc territory — in northern B.C. They refused to leave. Some 400 RCMP officers were deployed to the site, backed up by helicopters and armoured personnel carriers. Gunfights ensued. One Indigenous woman was injured. The standoff lasted several months, said to be one of the largest police actions in Canadian history at a cost of $5.5 million.

This began as a long-running dispute between non-Indigenous and Mi’kmaq fishers in New Brunswick, over the Mi’kmaqs’ treaty rights to catch fish and lobster out of season. There were numerous violent confrontations between them, with shots fired. In August 2000, federal fisheries officers launched a raid on Mi’kmaq lobster traps, ramming Mi’kmaq boats and forcing their occupants overboard.

This report by The Canadian Press was first published Feb. 23, 2020.

Once convicted of manslaughter, ex-gang member now licensed as lawyer 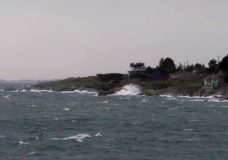