WATCH: There was a heartwarming sight in all this cold, in Cobble Hill on Wednesday. The community turned out to build a massive snowman in the village’s downtown. Skye Ryan has the story.

Volunteers from all corners of Cobble Hill trudged through nearly waist deep snow, not to get to work, but to build a snowman.

Symons is an education assistant, and had the day off anyway, so she decided to coordinate the event for the community.

“It’s awesome! I’m happy to see everybody. Everybody looks so happy,” said Symons.

Wednesday marked the third day in a row that schools in the Cowichan School District were closed due to the snowfall. Leaving many communities buried beneath the blanket of white.

“I was in complete shock when we woke up and got this,” said mother of five Britney Chambers. “It reminded me of the great white north.”

So Symons put out the word and hoped for the best. The dozens that responded amazed her.

“To have this much snow and be able to do this with my kids I’m so excited!” said Cobble Hill local Amber Farquharson.

“This is making all these kids dreams come true,” added Chambers.

Chambers grew up in Prince George and says this dump of snow is like a trip back to childhood.

“It just brought back memories,” said Chambers. “A lot of memories of growing up, of my childhood.”

Teenagers worked right alongside toddlers, building the snowman as high as they could reach.

The effort turned out a snowman that may not the biggest in the world, but tallest in Cobble Hill for sure. And the memories of building it will remain long after the snowman is melted and gone. 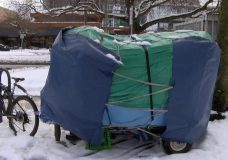 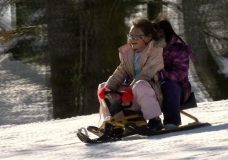 February snowfall record is a windfall for students