WATCH: A cube van catches fire near the Uptown Shopping Centre on May 17, 2019. Submitted.

Drivers in Saanich saw some delays near the Uptown Shopping Centre Friday morning after a cube van caught fire.

The fire was captured in dramatic video by a passerby. Two people are seen using fire extinguishers to try to put out the fire in the front of the van before Saanich firefighters arrive.

Tony Scherer from the Saanich Fire Department said one engine with four members responded to the fire in the 3400-block of Saanich Road right at 8 a.m. He said the crew stretched one line and quickly put out the flames.

There were no injuries and the cause of the fire is being investigated. 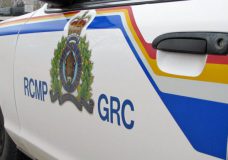 Suspect arrested after break and enter in Courtenay