June 17, 2021 updated
CHEK
WatchBio-solids were suppose to be shipped to the mainland, but instead they're being spread at the Hartland landfill. Kori Sidaway finds out why.

The capital of B.C. has a poop problem.

It’s a longstanding issue for Victoria. For a century, the Capital Regional District (CRD) pumped raw sewage into the Pacific Ocean.

New treatment facilities costing hundreds of millions of dollars were supposed to change that, but they’ve hit a glitch.

The plan was to send bio-solids from the CRD to the mainland to use as fuel at a Richmond cement manufacturing plant.

But what we’re sending them is too big.

READ MORE: From sewage to a pellet, a look at the CRD’s new residual treatment facility

“We’re simply going to get a sieve in place in line where we can actually make sure we can shake the pellets and get them down to a size that LaFarge, the cement facility, can handle,” said Harris.

So for now, the waste is being put into trenches in the Hartland Landfill, which is concerning to multiple environmental groups.

“The real concern is where you apply biosolids is not where they stay. Inevitably, research has shown that through wind dispersal, and water dispersal, and even human and animal activity, they can spread up to 10 km,” said Phillipe Lucas with BioSolid Free BC.

The big worry is the Saanich Inlet.

“As a crop-based business that heavily depends on the quality of our soil and water, our Owner and Board are gravely concerned about the CRD’s practice of spreading biosolids at the head of the Tod Creek Watershed,” said Dave Cowan, CEO of Butchart Gardens, in a letter to the CRD

But the CRD says the waste isn’t getting there.

It’s also the only viable option the CRD has right now and it’s temporary. They’re expecting the size of the biowaste will be solved in a matter of weeks.

“We expect sometime this summer to get these issues resolved,” said Harris.

But environmental groups are concerned there’s still a couple of weeks per year where, because of annual maintenance at Lafarge, the CRD will have to dispose of biosolids on the island.

“The last thing we should be doing, if we can’t use it as fuel at LeFarge, and certainly if we can’t do anything else is to use it as topsoil at Hartland Landfill,” said Lucas.

So BioSolid Free BC and other environmental groups are lobbying the CRD to bury the biosolids and look at gasification as potential fallbacks instead, which the Province is currently researching.

“Our current sewage treatment does not remove a lot of these chemicals that are emerging of concern like microplastics and endocrine disruptor agents,” said Harris.

“We feel like the OMRR, which are the regulations which govern the land application of biosolids are woefully out of date and not in any way protecting the environment local environment.”

The groups hope to meet with B.C’s Minister of Environment soon. 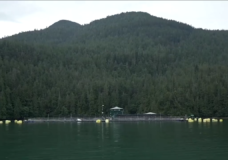 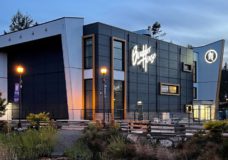