Spanish police say at least 13 people were killed and more than 100 injured after a van drove into pedestrians on a busy walkway Thursday. Tess van Straaten reports. 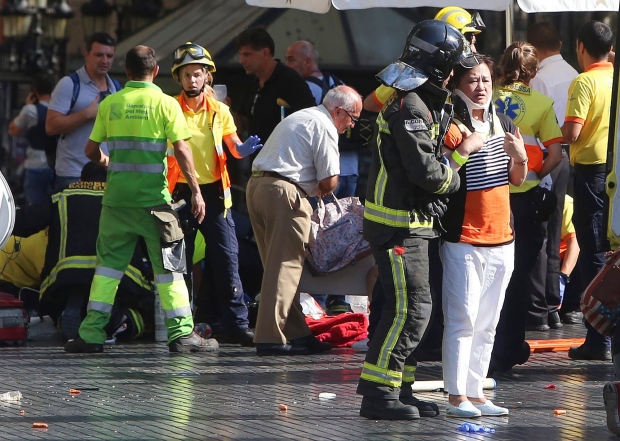 Injured people are treated in Barcelona Thursday after a van crashed into pedestrians in the historic Las Ramblas area. ((AP Photo/Oriol Duran)) Courtesy of CBC.

Norman Spector, a Victoria political analyst and former chief of staff for Brian Mulroney, is in Barcelona where at least 13 people were killed and more than 100 were injured after a van jumped up onto a sidewalk and ploughed into crowds in the historic Las Ramblas district Thursday.

Police said the incident was clearly a terrorist attack intended to kill as many people as possible. Officials also said the death toll may rise above the 13 already confirmed.

Spector tweeted on Thursday, ?Walked Las Ramblas today w my best friend?s grand-kids and we lunched at an outdoor restaurant. Have had closer calls but still unnerving.?

Walked Las Ramblas today w my best friend's grand-kids and we lunched at an outdoor restaurant. Have had closer calls but still unnerving.

By late Thursday, the regional department in Spain’s Catalonia region had revised the death toll from the attack back up to 13. It had previously been 12 people. The department also said 15 people were seriously injured in the attack. Twenty-three were moderately wounded and 42 were lightly wounded. The injured have been taken to various hospitals.

“Our priority is to save lives. And our second priority is the police investigation, to find the people responsible of this attack and anyone who has helped them directly or indirectly,” Puigdemont told Barcelona broadcaster TV3.

State-owned broadcaster RTVE reported that investigators think one van was used for the attack and a second van was used as a getaway vehicle. Las Ramblas, a street of stalls and shops that go through the centre of Barcelona. is a popular tourist destination. There is a pedestrian path in the centre of the street while cars can travel on either side.’

Islamic State group has claimed responsibility for the attack in a statement carried on its Aamaq news agency.

Global Affairs Canada says Canadians in the Spanish city should monitor local media and follow the directions of local authorities.

Officials say questions should be directed to the Consulate of Canada, which is just a kilometre away from where the attack occurred, as well as the Emergency Watch and Response Centre in Ottawa.

Several Canadian politicians have offered their condolences on Twitter.

Prime Minister Justin Trudeau wrote, “Canada condemns today?s terror attack in Barcelona ? our hearts, sympathies & support are with the victims and their families.”

Canada condemns today’s terror attack in Barcelona – our hearts, sympathies & support are with the victims and their families.

Trudeau also issued a statement offering his condolence, saying he is deeply saddened by the attack.

?While we cannot ignore the outrage we feel, together we must renew our commitment to protect the freedom found in societies that promote unity, openness and inclusion,” Trudeau said in the statement.

?Spain, we grieve with you and denounce hate and violence in all of its forms. Canada will continue working with the international community to fight terrorism and build a world where we can all feel safe and secure.?

Conservative Leader Andrew Scheer and NDP Leader Tom Mulcair both called the incident “terrible” and expressed support for the victims.

Terrible scene in Barcelona. Our thoughts and prayers are with the victims. We stand together condemning these horrific acts of terrorism.

Terrible news from Barcelona. We stand with Spain and all those impacted by this terror attack.

The afternoon attack in Barcelona is the country’s deadliest since 2004,  al Qaeda-inspired bombers killed 192 people in attacks on Madrid’s commuter trains. 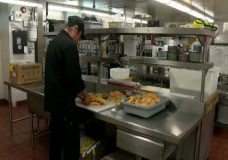