For the second year in a row, the Victoria Harbourcats are in the West Coast Playoffs. They started a best of three with Kelowna at Royal Athletic Park Tuesday night.

The Harbourcats earned their first ever playoff victory with eight unanswered runs in an 8-2 decision over the Kelowna Falcons.

The Falcons opened the scoring with runs in the second and third innings, but the Harbourcats tied the game in the bottom half of the third.

Harrison Bragg and DJ Porter provided back-to-back home-runs in the bottom of the sixth inning, one that saw Victoria take a 6-2 lead.

Ethan Fox got credit for the win on the mound, going four innings with three hits allowed, no runs and four strike-outs.

Game two of the best of seven series goes Wednesday night in Kelowna.

Tuesday’s win is the first in post-season history for the Harbourcats. 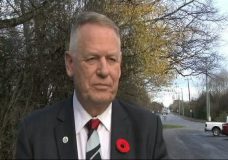