After an exhilarating game 7 double overtime win earlier this week , the Victoria Grizzlies open up the BCHL Coastal Final tonight in Chilliwack, and as Tyler Bennett reports, the team expects it only get tougher from here.

After one of the biggest goals in franchise history led the Victoria Grizzlies to the BCHL Coastal Final, head coach and GM Craig Didmon and his team are now focused on the new task at hand.

“It seems like it happened a long time ago now,” Didmon says, “but you know right away we got down to it, Cody Van Lierop, as soon as the game was over he walked up to me and said “we’re only halfway there” and you know, I’m glad he said that and it just shows you the leadership in the room, I mean it was certainly a great event for the city and our fans, but it is time to move on, we’ve got a real good hockey club in Chilliwack to face on Friday night so we’re getting down to it again.”

The Grizzlies and Chiefs haven’t met since October, when Cody Van Lierop scored a highlight reel overtime winner to lift the Grizz over Chilliwack on the road.

“We didn’t see that before out of him,” Grizzlies forward Cole Pickup says,  “seen it a couple times in practice maybe but, I think he’ll have a little bit of extra confidence going into this series, just knowing he’s buried against them.”

“they’re a real good hockey club,” Didmon says,  “they were in the league finals last year, to knock off Wenatchee, who were regular season kings, in 4 straight just shows you, they’re on a mission themselves it’s going to be a tough series for sure.”

While the Grizzlies have turned the page on game 7, they still hope to carry that momentum into a well rested opponent in Chilliwack.

“I think the thing that we have going for us is that we’ve played a lot of hockey lately and we’re not too badly banged up and bruised,” Grizzlies veteran forward Nathan Looysen says, “you look at Chilliwack and they haven’t played in over a week, so that can sometimes be not such a good thing, so for us I think we have to take the momentum from the last two series and take it into Friday and Saturday this weekend and just do our best.”

Game 1 gets underway tonight in Chilliwack. Puck drop is set for 7:00pm. 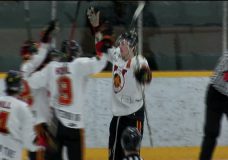 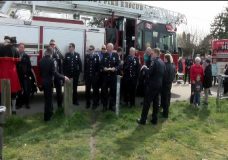