Coun. Ben Isitt brought forward a motion to ban the power equipment by 2023 under a noise by-law, which was seconded by Councillor Jeremy Loveday.

“I do continue to hear from a lot of residents saying, ‘why is this guy on my street using a bunch of fossil fuels, causing a massive noise disruption when there’s a number of other technologies?'” Isitt told the council.

“This is something that we will look at, but definitely it is an area where we get quite a few complaints,” added Councillor Charlayne Thornton-Joe.

The same motion was looked at in Saanich earlier this year, but it failed to pass, leaving advocates like Teale Phelps Bondaroff — who launched a petition calling on the ban of gas-powered leaf blowers — feeling disappointed.

“The two-stroke engine used in most gas-powered leaf blowers is incredibly inefficient and incredibly polluting,” he continued.

Now that the focus has turned to Victoria, he hopes that this time, the motion will pass.

The company made the switch from gas-powered leaf blowers to electric three years ago and they expect other companies to do the same in the years to come.

While the investment was costly initially, the company said it was the right call to go electric.

“It hasn’t really made a huge difference on our own time or our financial commitment, but the overall pollution, noise pollution, gas use is much better. Better for the health of our employees as well,” said Daniel Buchanan, the company’s resource manager.

“The improvements are significant. It doesn’t mean completely quiet, but the reduction is significant enough that everyone notices and appreciates,” he continued.

The city’s current by-law only allows a maximum noise level of 75 decibels from the power equipment and use is limited to 3 consecutive hours between 8 a.m. to 8 p.m. 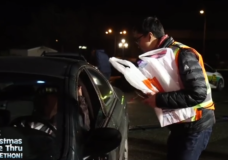