Victoria Police have seized a vehicle they say closely resembles the Mini Countryman that was involved in a hit and run which was captured on dashcam footage, but there have been no arrests.

“We need to make sure this is the vehicle 100 per cent and we also need to be sure we can establish that in a court of law, as needed,” says Bowen Osoko, Victoria Police spokesperson.

He added, “We need to be able to establish who is behind the wheel at the time the collision occurred.”

VicPD says they found the vehicle around 10 p.m. last night following a tip from the public.

Officers determined the damage to the vehicle was consistent with a recent collision, so it was towed to a secure storage area.

Forensic Identification Section officers are working with VicPD’s Collision Reconstruction Team investigators to determine if the vehicle was involved in the hit and run.

Just after 9 a.m. yesterday, a woman was crossing the street at the intersection at Bay and Blanshard streets, when the driver ran a red light, hitting the woman in the process, and proceeded to drive off.

“She checked the road before she entered the roadway, she was in the crosswalk, she had the walk signal, it was a red light,” adds Osoko.

The woman suffered non-life-threatening injuries and was released from the hospital. VicPD says she is continuing to recover and is very lucky her injuries weren’t more severe.

“Pedestrians should not have to rely on luck to cross the street in Victoria,” says Osoko.

The incident was captured on dashcam footage, which VicPD has released.

Viewer discretion is advised when watching the clip.

UPDATE | A vehicle closely resembling the vehicle has been located & seized by officers after members of the public spotted it after viewing the video of the crash. Forensic & Collision Reconstruction Team officers continue to investigate. #yyjtraffic | https://t.co/Uy3ZFqCNct https://t.co/GAzXvLNchO

Officers are still hoping to speak with the driver of the white Tesla Model Y, which was making a left turn through the intersection at the time of the collision. They believe the vehicle may have captured additional footage which may assist with the investigation.

The woman lost her cell phone when she was hit, so police are asking if anyone found a cell phone in the area to call the numbers below. 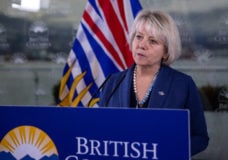 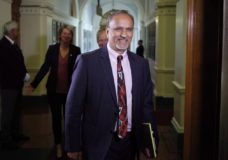