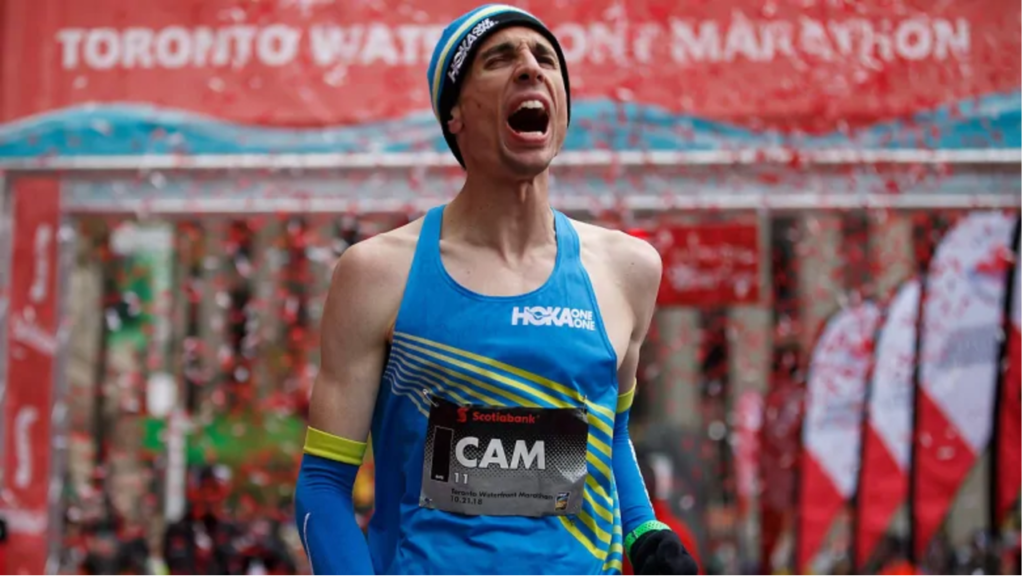 Cole Burston / The Canadian Press
Cameron Levins prepared for Sunday's London Marathon on a compound somewhere outside of England's capital on Tuesday.

Cameron Levins prepared for Sunday’s London Marathon on a compound somewhere outside of England’s capital on Tuesday.

He couldn’t divulge where he was exactly.

He wasn’t permitted to accept a call on his hotel phone. He couldn’t upload his training sessions to the running app Strava, lest anyone figure out the location. The secrecy was to prevent anyone from penetrating the carefully-constructed London Marathon bubble.

Six months after COVID-19 forced the cancellation of the world’s top road races, London organizers have gathered a small but elite field, including Canada’s Levins and Tristan Woodfine, to race on Sunday.

“I didn’t know when the opportunity (to race again) would arise, this situation they set up is really special,” Levins said on a Facetime call from his top-secret location Tuesday. “It’s far from what I’d consider a normal race situation, but I’m thankful for all the precautions they’re taking and for being able to put together such an elite marathon, despite everything that has gone against trying to do it.”

Levins, a 31-year-old from Black Creek, B.C., and the Canadian record-holder in the marathon, said the elite race was made possible largely by the entry fees from the 45,000 recreational runners that registered to run a virtual London Marathon.

“Marathons are built off mass participation,” Levins said. “And they’ve completely circumvented that to do this for the athletes. It’s really, really amazing that this opportunity even exists, and I’m very grateful, beyond just how good it’s going to be in terms of competitiveness.

“It’s a marvel that it’s happening.”

Kenyan Eliud Kipchoge and Kenenisa Bekele of Ethiopia, two of the greatest distance runners in history, headline Sunday’s field of 40 men. There are no Canadians in the women’s field.

Brent Lakatos, an 11-time Paralympic world champion from Montreal, and Josh Cassidy of Port Elgin, Ont., are the Canadians in the elite wheelchair field.

Levins was required to undergo a novel coronavirus test four days before flying to London on Monday from his Portland home. He had another test Monday, and will have one more on Friday.

The runners were given a wearable “Bump” device that functions sort of like a FitBit, but for COVID-19 safety. Levins said if he gets too close to a fellow runner, volunteer, hotel employee, etc., he receives an alert on the device he wears around his neck. He downloads the Bump data every evening.

Levins will be gunning for the Tokyo Olympic qualifying standard – two hours 11 minutes 30 seconds – on Sunday. Two years ago, Levins obliterated the Canadian record in his marathon debut at the Scotiabank Toronto Waterfront Marathon, running 2:09.25. Jerome Drayton’s 43-year-old national mark of 2:10:09 had been the oldest record in Canadian track and field.

He’d planned to race last April, but it was cancelled due to COVID-19, along with other major road races such as the iconic Boston Marathon and the New York Marathon, leaving marathoners scrambling in efforts to run the Tokyo standard.

Canadian races, such as the Toronto Waterfront Marathon, have gone virtual, and virtual times can’t be used for Olympic qualifying. Calgary’s Trevor Hofbauer and Vancouver’s Dayna Pidhoresky qualified for Tokyo as the top Canadians in last year’s Scotiabank race, and retain their Olympic spots despite the Games postponement.

Levins’ training wasn’t interrupted much by the coronavirus _ if there’s an ideal athlete to be during a pandemic, it’s arguably a long-distance runner. Levins trained largely alone already. Not having access to physio and massage therapy for four months, however, wasn’t perfect, but he said he was lucky to remain healthy through that period.

Then in August, Levins recorded a new personal best in the half-marathon, running 1:02.12 to beat his previous mark of 1:02.14. The time wasn’t official since it was a solo training run, but was an excellent gauge of his racing fitness.

“My wife (Elizabeth) drove along for a decent amount of it, so that was nice,” Levins said.”Otherwise, I was out by myself on the side of the road, just zooming along. It was fun to be able to put forth an effort like that after spending half a year not really doing anything.”

Sunday’s Virgin Money London Marathon is being held on a closed-loop circuit – the loop is about two kilometres – around scenic St. James Park in central London. The iconic finish on The Mall from previous London marathons will remain the same.

“You spend so much time training at that speed that I get the feeling that, maybe not the full 20 laps, but a lot of that is going to fly by pretty quickly,” Levins said.

And while distance runners are accustomed to solitary training runs, Levins said nothing beats a true race, standing shoulder-to-shoulder at the starting line with the best on the planet.

“I’m certainly excited to race again, he said. ”There’s been a lot of virtual opportunities, but it’s really not the same. I love the sport so much, and a big part of that is being able to pit myself against others, to be able to dig down and actually race.

“Being able to line up against others, I’ve been excited even before coming here.”

Kipchoge is the world record-holder in the event, running 2:01:39 in 2018. The Kenyan is also famous for the Nike Breaking2 project. The 2017 event was designed to see the first sub two-hour marathon. Kipchoge was the closest, running 2:00.25.