Vaccinations on Vancouver Island are now among the highest in the province, but that means second doses are taking a little longer, the region’s top doctor says.

As the province opens up under Step 2 and case counts plummet, Dr. Richard Stanwick says the enthusiasm for the vaccine is delaying progress on second jabs. While most of Island Health has now surpassed 70 per cent for first doses, only 15.6 per cent have received their second doses, according to Island Health.

“We’re probably booking appointments a week or two later than a lot of the rest of the province because of such good uptake,” he said.

So far, the Saanich Peninsula has the best track record so far of any region at 86 per cent of first doses adminstered.

The lowest is Cowichan Valley West at just 66 per cent. Island Health says access to vaccine in the area is a challenge, but it has a plan to change that with easy-access clinics in Lake Cowichan.

“We’re actually going to set up in the valley in a location that would probably rival convenience and access that we’ve been able to do for our larger centres,” said Stanwick.

B.C. has seen vaccination levels trend in a positive direction, with more than four-million doses adminstered across the province or 76.3 per cent of all adults, but a rate of between 80 to 90 per cent is needed to achieve a good level of protection from the Delta variant, according to a COVID-19 modelling expert.

“It’s possible still, especially with Delta and only one dose, to get it, to get infected, then that really means the virus can still move around and get to those pockets of people that are unvaccinated,” said Dr. Sally Otto, a COVID-19 modeller at UBC.

“This is a virus that hasn’t stopped evolving, we still want to protect from future variants that arise elsewhere and come into our province and that’s yet another reason for us all to get vaccinated because we don’t want to go through all this again, we want to protect our communities.”

There were no cases of the Delta variant detected on Vancouver Island in the past week. Out of all new cases, 60 per cent were a variant of concern, and all of those were the Alpha variant first detected in the U.K.

However in that same week, the South Island has seen a slight bump in active active cases from just 17 a week ago to 41 as of Tuesday. Meanwhile, the North and Central Island have ranged between four to eight cases, and four to seven cases, respectively.

Stanwick says most of those cases on the South Island are connected to a small cluster in the hospitality industry.

“It was associated with a situation where we had two basically businesses, in the hospitality industry, where in doing our case finding, we identified cases and close contacts,” he said.

With the next step of reopening now underway, health officials admit there may be a slight rise in cases in the weeks ahead, but with vaccinations still in high gear there’s optimism Vancouver Island will remain on the right track. 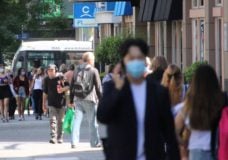