Ukrainian Village aims to provide free, safe and supportive housing for Ukrainians fleeing their country’s war with Russia, and starting a life here on Vancouver Island.

Devon Sereda Goldie, president of Victoria’s Ukrainian-Canadian Congress branch, said the Ukrainian Village will be for families that are ready to leave a host family situation, but aren’t quite ready to be fully living on their own.

“A next stage to provide them a little more support and provide them support in a space that is filled with community members so they don’t feel isolated,” Sereda Goldie said. “And they feel like they are able to work on their English skills, work on finding a job, getting everything they need so they can be successful and independent.”

The village has 15 rooms and can house 45 Ukrainians. Sereda Goldie said the rooms are very similar to dorm rooms. They have at least two single beds and a small kitchenette with a fridge, microwave and coffee maker, as well as a personal washroom with a shower. There is also a communal kitchen and living area.

She says it’s meant for families to stay for about three months before moving into their own place so there can be a rotation of people coming through.

“With Help Ukraine Vancouver Island, we have been placing Ukrainians. We currently have a wait list of over 2,000 people who want to come here to the island,” Sereda Goldie added. “So as people have stayed for 90 days, we’re trying to bring in new people through our existing host.”

A few residents have already moved into the village and are calling it a safe haven.

Iryna Hromova is living in the village with her two-and-a-half-year-old son after fleeing her hometown of Kyiv. She said this is a great opportunity for her to save for her own apartment and adjust to Canadian culture.

“It’s been such a learning curve for all of us. We have been so grateful to the community who stepped up and helped make this possible so that we can assist Ukrainians and provide this safe space,” Sereda Goldie said.

She added they are looking for some more furniture as only seven of the 15 rooms are ready to go. 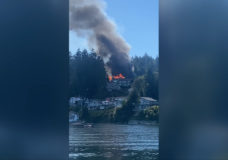 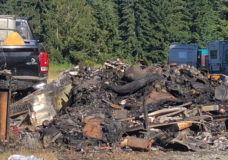