The endangered southern resident orcas are struggling for survival and when there was news this week of not one, but two pregnant females – including J35 who back in 2018, captured the world’s attention carrying her dead calf for 17 days over 1,600 kilometres – there was relief.

But as the United States Navy reapplies for permission to carry out training and testing in the waters of the Pacific Northwest, scientists are concerned for the endangered species once again.

“The activities that they’re suggesting they want to engage in, have the potential to do great harm,” said Deborah Giles, a research scientist with the UW Center for Conservation Biology.

“Our current authorization for the Northwest study area expires in November 2020 and we are currently working with the National Marine Fisheries Service on a new authorization that maintains our continued commitment to environmental compliance,” said Lt. Emily Wilkin, U.S. Navy spokesperson.

There have been agreements like this in place for decades, letting the U.S. Navy test torpedoes, fire projectiles, pilot undersea drones, and explode underwater bombs, all in the name of training.

This year, compared to the last application in 2015, the U.S. Navy is looking to increase the number of ships on the water for exercise days and training.

The increase means the number of times the southern resident orcas would be subjected to what’s categorized as “Level B” harm would go up. The U.S. Navy defines these as a “take” – whenever harm comes to an animal in the course of activities approved by federal officials charged under the Marine Mammal Protection Act and the Endangered Species Act with protecting marine mammals and threatened wildlife.

According to the U.S. Navy, a 2015 letter of authorization for the northwest study area authorized two annual “takes” to southern resident killer whales until 2020.

Many researchers are shocked at that increase, and that the level of harm is being categorized as merely “Level B”.

“At ‘Level B,’ it’s things that aren’t expected to kill an animal. So it might be, for example, changing the animal’s behaviour from foraging to travelling. For an extremely stressed and small population like we have with the southern resident killer whales, those types of activities really need to be scrutinized,” said Giles.

Whale watchers and researchers in American waters also apply for some “Level B” disturbances. Whenever whales get within 150-200 metres of researchers’ boats, that’s documented as a “take.”

Upwards of 20 research groups as well as Washington State Governor Jay Inslee are calling on the U.S. Navy to implement safer practices.

Inslee is pitching seasonal limits on the Navy’s use of sonar in prime orca feeding areas, the use of better marine mammal detection technology, and a bigger exclusion zone around whales.

Right now, the Navy’s application is being assessed by the National Oceanic and Atmospheric Administration. They’re drafting a final rule for implementation of the program. 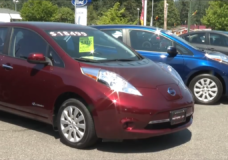 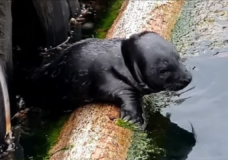