Posted: Jul. 30, 2020 6:48PM
CHEK
WatchThe sport fisherman was at the Port McNeill fuel dock where he saw a days-old seal pup that he was thought was in distress.

The B.C. castline is abundant with marine mammals that are protected by Canadian law, but an American believed to be visiting Port McNeill from Texas did not leave one of those animals alone.

“We got a call from a member of the public whose husband was up fishing near Port McNeill. He was observing a seal pup that he felt was in need of rescuing and he went about it himself to actually capture the animal and place it on his boat,” said Lindsaye Akhurst, manager of Ocean Wise Marine Mammal Rescue Centre in Vancouver.

The seal pup, believed to be about five days old when it was “rescued” was already being monitored by the B.C. Marine Mammal Response Network and photos showed it keeping close to the fuel dock at the Port McNeill marina, its umbilical cord still attached.

Its mother was off presumably getting food which experts say is completely normal behaviour.

The fisherman thought the baby was in distress, put it in his boat and took off for Vancouver.

“He didn’t realize how far it was from Port McNeill to Vancouver,” said Akhurst.

It was the man’s wife on the phone from Texas and it took about 24 hours to get a hold of him on his boat because of poor cell coverage.

In the meantime, the pup’s condition had deteriorated so arrangements were made to have the man drop it off in Campbell River where experts eventually got it to Vancouver for treatment.

The Department of Fisheries and Oceans says it is not pursuing charges in the matter preferring instead to focus on public education reminding everyone that it is a federal offence to move, feed, swim with or interact in any way with marine mammals.

“It’s been two weeks since we brought who we call Zenon Samuel into our centre,” added Akhurst. “He’s doing very well. Obviously he was dehydrated and malnourished when he came in.”

CHEK News was unable to determine if the fisherman was in B.C. illegally due to COVID 19-border closures. 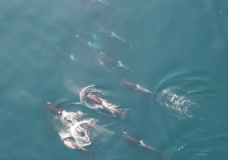 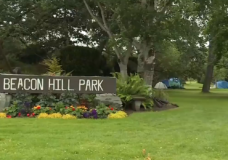