WATCH: Hardy, a sea otter who was rescued off of northern Vancouver Island, meets Rialto. Rialto is another sea otter was found on a remote beach in Olympic National Park. Credit: Ocean Wise.

The two youngest rescued sea otters at the Vancouver Aquarium have met for the very first time.

On Tuesday, the Vancouver Aquarium released a video of five-month-old Hardy and 16-month-old Rialto meeting.

“In fact, it went even better than we had anticipated,” Heffron said in a statement.

“Our team has provided care for both Rialto and Hardy from a very young age so we?ve really been looking forward to this moment. We?ve been overwhelmed by the support of our sea otter rescue and rehabilitation efforts as well as the interest in the development and wellbeing of these young otters; we?re so delighted to share this milestone with our visitors and supporters as well.?

Rialto was found alone on a remote beach in Olympic National Park in Washington on Aug. 1, 2016. According to the Vancouver Aquarium, Rialto, who was sick, stranded and without his mother, had a low chance of survival. After six weeks of 24-hour care at the Seattle Aquarium, Rialto started to thrive. He arrived at the Vancouver Aquarium in September 2016 to receive long-term care.

Hardy was found after members of the public saw him swimming alone in open water off the coast of northern Vancouver Island.

The Vancouver Aquarium’s Marine Mammal Rescue Centre said boaters collected the sea otter after it approached them and started the follow the boat while vocalizing. There were no other adult sea otters in sight.

Once he was brought to Port Hardy, officers from Fisheries and Oceans Canada transferred the otter to the Marine Mammal Rescue Centre. In late July, Hardy was moved to the Vancouver Aquarium. He continued to receive 24-hour care as he transitioned to eating solid food and learning to swim and dive. He is now independently swimming, grooming and diving.

This week’s meeting with Rialto was not Hardy’s first introduction with another otter. He also met 13-year-old Tanu and five-year-old Katmai over the past few months.

The six otters living at the Vancouver Aquarium have been deemed non-releasable following rehabilitation as they were very young when they were rescued and did not have sufficient maternal care to learn the necessary skills for survival. During its first six months, a sea otter pup is highly dependent on its mother for food and without her, is not able to survive. The mother’s health can decline over the feeding period as energy is spent taking care of the pup.

Female sea otters give birth every year. If the female otter determines she has a better chance of rearing another pup the next year due to environmental factors or availability of prey, she may abandon the pup before it is weaned. 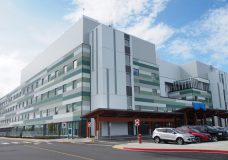