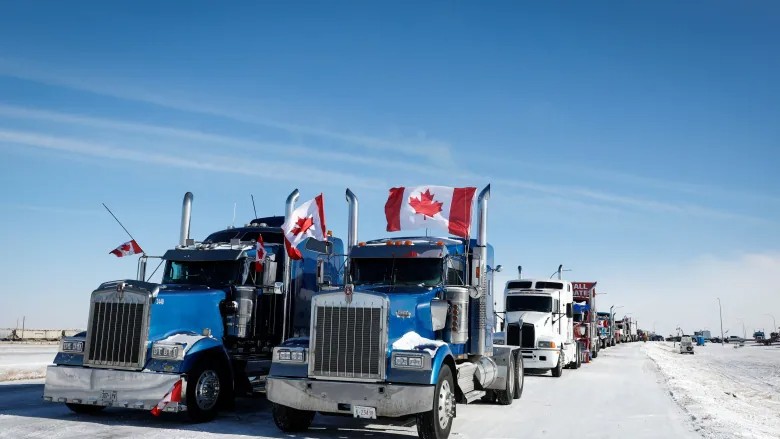 Bearing a load of produce bound for Sobeys, Nihal Singh pulled up to a border checkpoint in northern Montana late last month only to find the path blocked by big riggers on the other side.

Semi-trucks and protesters barred the way in Coutts, Alta., as they demonstrated against vaccine mandates, holding up Singh for nearly two days, one of the hundreds of drivers stopped by the blockade.

After more than 24 hours, he and a group of other South Asian Canadian truckers approached authorities to find out when they could pass.

“That’s when another guy, he came out of his truck and he was, like, being racist. He was saying, ‘Go back to your truck, go back to India,”’ recalled Singh, a 28-year-old driver from Edmonton.

Disturbed, he and his co-driver set out for another crossing — an option unavailable to some, since oversize loads can only move through certain checkpoints — on a route that added more than 500 kilometres to their trip. The delay meant they missed their next load, costing them a week of work — nearly $6,000 between the two of them.

Singh is now mulling an exit from the long-haul industry. Frustration and disgust at the recent blockades and encampment in Ottawa may be the final straw atop concerns ranging from wages to road safety, social isolation and exhausting working conditions.

“I’ve been having really bad experiences in the last few months,” he said.

If Singh and others are driven away, they’ll be leaving a field already desperately short of labour.

The trucker job vacancy rate hit a historic high of nearly 23,000 in the third quarter of 2021, according to figures from Statistics Canada. Young drivers, women and retirement-age workers have left the sector in droves over the past two years, with some 55,000 job vacancies projected for 2023, says Trucking HR Canada.

Demand for drivers soared during the pandemic as a spike in online shopping led to a corresponding climb in deliveries. Meanwhile, the number of workers entering the industry has been dropping for years due to a confluence of factors including stagnant wages, shifting labour patterns and prohibitive insurance policies that make it difficult for new drivers to earn a living.

South Asian Canadians make up a major axle in the sector, comprising 16 per cent of truckers in 2021 compared with just two per cent 25 years earlier, according to Statistics Canada data. In cities such as Toronto and Vancouver, they account for more than half of drivers.

They also belong to a community with a high vaccination rate, in contrast to the anger over vaccine mandates for border crossing expressed by a small slice of the industry.

Statistics Canada noted last year that a larger proportion of South Asian Canadians reported a willingness to receive the vaccine than the wider population. Brampton, Ont., which has a high concentration of residents with recent roots in India and Pakistan, boasts a vaccination rate of 92.5 per cent among people five and older.

The self-described “freedom convoy” was fuelled from the start by participants with a grab bag of grievances — many unconnected to pandemic measures for truck drivers. Its co-opting by actors ranging from Confederate flag wavers to Donald Trump Jr. has led some to reconsider their place in the field.

Alberta-based trucker Lovepreet Singh, who missed a week of work due to the Coutts blockade, says the anti-vaccine mandate movement carries no resonance for him, and that concerns like labour conditions and wage theft are much more central but attract little attention.

“They don’t even want to listen to our opinion … ‘Go back to your country,’ and stuff like that,” Lovepreet recalled of comments he faced near Coutts and online.

Kulpreet Singh, the founder of the South Asian Mental Health Alliance, launched a GoFundMe campaign for truckers to help a community he says feels disempowered by alt-right voices linked to the demonstrations.

“Definitely when you don’t see yourself represented in a movement that is purporting to speak for you, that can be discouraging and disempowering. So whereas there have been some members of the South Asian community that have aligned with the conflict, they’re very few and far between,” Kulpreet said.

Monty Chrysler, who retired last year as head of training at Ontario-based International Truckload Services, said the association of even a few hundred truckers with the blockades could have “a big effect” on recruitment.

In the wake of swastikas and other hateful symbols brandished on the streets of Ottawa — suddenly calm after a police crackdown over the weekend — others may feel emboldened to verbally abuse South Asian Canadians behind the wheel.

“My only worry is that there may be hate or discrimination in the coming days,” said Gagan Singh of B.C.’s United Truckers Association. 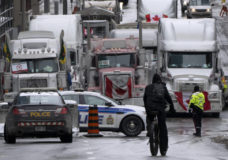 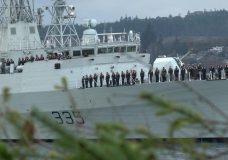 Military ships to conduct sail past of Victoria, Ogden Point before departing on latest operation