UPDATE: Tsunami alert for coastal B.C. no longer in effect

The National Tsunami Warning Center issued a cancellation at 2:33 p.m. Pacific Time for all watch, advisory and warning notices for coastal British Columbia that had been issued.

No zones of coastal British Columbia are at risk anymore.

The advisories and alerts were issued following a volcanic eruption near the Pacific island nation of Tonga — approximately 9,200 kilometres southwest of Vancouver Island — that occurred on Friday B.C. time (Saturday Tonga time).

TSUNAMI ADVISORY CANCELLED for BC Coast. The Tsunami Advisory for #BC Notification Zones C & D has been CANCELLED, no further Advisory remains for BC. More info: https://t.co/PoX2nEFzVs #BCTsunamihttps://t.co/PRk5sKraC6

The tsunami advisory remains in effect for parts of coastal United States. Updates can be found on the National Tsunami Warning Center’s website.

Emergency Management B.C. has issued a tsunami advisory for much of B.C.’s west coast following after an undersea volcano erupted near the Pacific nation of Tonga last night.

It includes the west coast of Vancouver Island spanning from Greater Victoria to Cape Scott, including the Saanich Peninsula.

Emergency Management B.C. says if you are in a tsunami advisory area you should not go near the shore and to move out of the water, off the beach, and away from harbours, marinas, breakwaters, bays and inlets.

A #Tsunami Advisory means: a dangerous wave is on the way. Strong and unusual currents are expected along the coast, and in bays, marinas, and harbors. Move to high ground and away from the shore. More at https://t.co/npoUHxEZLS. pic.twitter.com/MCLDdN9qPp

It also says to “not return to the coast until local emergency officials indicate it is safe to do so.”

The tsunami advisory was issued at 6:40 Saturday morning.

The Tsunami Advisory REMAINS IN PLACE for #BC Notification Zones C & D, including the outer west coast of Vancouver Island and the Juan de Fuca Strait. The Advisory has been CANCELLED for Zones A & B. More info: https://t.co/d7gtN0xRwb #BCTsunamihttps://t.co/lN6pWMqlXa

Zones A and B include the North Coast and Haida Gwaii, and the Central Coast and northeast Vancouver Island Coast, including Kitimat, Bella Coola and Port Hardy.

Local governments in these zones are asked to activate their emergency plans and to consider evacuating marinas, beaches and other areas at risk.

At this time the only zone not under tsunami advisory is Zone E, which covers the Strait of Georgia including the Gulf Islands, Greater Vancouver and Johnstone Strait.

If you are in a tsunami advisory area:

Mike Farnworth, B.C.’s minister of public safety and solicitor general issued a statement which echoed the warnings to stay away from beaches, shorelines and marinas.

“To be clear, this is an advisory only, and not tsunami warning. The risk is limited to increased tidal currents,” Farnworth said in a statement.

“Overnight, several communities along the coast activated their emergency plans. Emergency Management BC immediately activated the Provincial Emergency Co-ordination Centre, and all provincial regional operations centres on the coast. The agency has also been supporting local governments and First Nations with updates and a series of co-ordination calls.”

The U.S. National Tsunami Warning Center has tweeted the first waves have been observed in some locations, and remind people that the first waves that arrive may not be the largest.

#Tsunami observation update:
A Tsunami is occurring. Remember- the first wave may not be that largest. Move away from the shore and head to high ground. https://t.co/npoUHxEZLS pic.twitter.com/HmXl5cyIkr

The CRD has issued a public service announcement about the tsunami warning reminding people to not go near the water, if someone is near the water to move out of the water, off the beach and away from harbours, marinas, breakwaters, bays and inlets.

They say at this time people are not asked to evacuate their homes.

The CRD says the tsunami advisory is expected to be in place for five to six hours.

Tsunami Advisory in effect for our region – The National Tsunami Warning Centre has issued a tsunami advisory for the Juan de Fuca Strait coast due to a volcanic eruption in the Tonga Islands. https://t.co/zeUkId1d5l #crdalert

E-Comm 911 says they are not the right people to call for information about the tsunami, but instead people should be checking with other official sources.

IMPORTANT: A Tsunami advisory is in effect for several parts of #BC. For info/instructions check local govt websites/social media channels. ONLY call 9-1-1 for emergencies – we have already been fielding questions that should be directed to local govt. #HelpUsHelp #911BC https://t.co/QKv2Xon8uw

Tofino has closed public access to the public beaches.

Until further notice all public beaches will be closed to the public.

Additional information will be provided as it becomes available.

The City of Colwood has closed the gates at Ocean Boulevard to block vehicle access to the Esquimalt Lagoon during the tsunami warning as a precautionary measure.

Following a tsunami advisory for our area, @EmergencyInfoBC is advising that beaches be closed as a precautionary measure. The gates on Ocean Boulevard along the Lagoon Beach in #Colwood will be closed this morning out of an abundance of caution.

There were no immediate reports of injuries or on the extent of the damage because all internet connectivity with Tonga was lost at about 6:40 p.m. local time, according to the network intelligence firm Kentik. Tonga gets its internet via an undersea cable from Suva, Fiji, which presumably was damaged.

The National Weather Service Honolulu released the following satellite footage of the volcanic eruption of the Hunga Tonga-Hunga Ha’apai volcano.

According to the Smithsonian Museum Global Volcanism Program the last known eruption of this volcano was in 2015.

The volcano was experiencing activity between Dec. 29 and Jan. 4 this year, according to the museum, but the activity stopped on the fourth.

During this activity gas, steam, and ash plumes rose at least to 12.2 km, which lasted for up to 30 minutes.

This is a developing story, more details will be added as information becomes available. With files from the Associated Press. 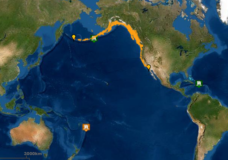 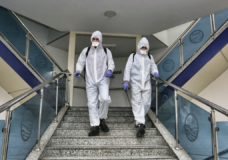