Following a volcanic eruption near Tonga, most of Coastal B.C. was placed under a tsunami advisory, which resulted in officials warning people to stay away from beaches, shorelines and marinas.

Mike Farnworth, minister of public safety and solicitor general, said the advisory was on the lower end of the scale, closer to a watch alert.

An advisory is issued if waves are expected between 0.3 to one metre, and the main danger is from strong currents or dangerous waves. If a wave is expected to be higher than one metre, a warning is issued.

A #Tsunami Advisory means: a dangerous wave is on the way. Strong and unusual currents are expected along the coast, and in bays, marinas, and harbors. Move to high ground and away from the shore. More at https://t.co/npoUHxEZLS. pic.twitter.com/MCLDdN9qPp

“In terms of the advisory, the way the threshold was reported we just met that threshold when the advisory is issued. So when an event takes place, it’s monitored by the National Tsunami Warning Center, which is based in the states and provides all the information to both the U.S. and Canada,” Farnworth said.

“In Hawaii, for example, the waves when they reach Hawaii would be about 30 centimetres in height. And then obviously, we’re still significantly further away from Hawaii. And so by the time we reach us, it is like it is significantly lower than that.”

A #Tsunami is occurring along the AK, British Columbia, & US West Coast. Here are some of the latest water level observations we've recorded. Move to high ground and stay away from the coastline. Follow instructions from your local emergency management officials.

The tsunami advisory is still in place, and the waves first arrived at B.C. around 8:30 a.m. PST this morning.

Farnworth says the U.S. National Tsunami Warning Center keeps an advisory in place until three hours after the last waves in the area.

Farnworth said that although the tsunami today is not expected to cause damage, it is a good reminder to be prepared for an emergency.

“This is a good reminder for people to be prepared for things such as earthquakes and tsunamis,” Farnworth said. “Always have an evacuation plan. In the case of an arrest earthquakes, obviously have emergency kits and supplies at home, whether it’s water or flashlights, batteries, things like that.”

The volcano that erupted is located about 64 kilometres north of Tonga’s capital, Nuku’alofa and more than 9,000 kilometres southwest of Vancouver Island.

This story was updated with information about wave height provided by the U.S. National Tsunami Warning Center. 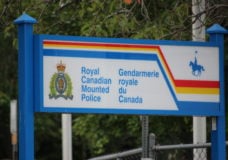 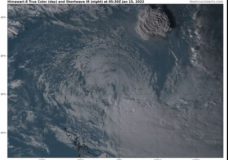 UPDATE: Tsunami alert for coastal B.C. no longer in effect