July 18, 2020 updated
CHEK
WatchA huge housing project in Colwood has been given the green light. But locals say better road infrastructure and rapid transit need to be put in before more houses are. Kori Sidaway reports.

Two thousand, one hundred new houses and shops are coming to Colwood’s Royal Bay area, a massive add-on to a rapidly expanding community.

The first to be built will be smaller local places in comparison to big box stores.

“We’re not talking about big box. That’s all found in Langford and in other parts of Colwood. What we’re talking about here is a daycare, cold beer and wine store, it’s the grocery store. We’d love to have a restaurant or pub,” said Ben Mycroft, senior development manager of Gablecraft Homes, the developer in charge of the new community.

“This is a game-changer for our community,” said Colwood Mayor Rob Martin.

“We’re really trying to build this community as a walkable, bikable community. And one of the things we heard loud and clear from the community is that we need amenities in our area.”

Right now, Colwood’s population is just over 17,000. According to population projections,  it will more than double, in the next 25 years.

“We are actually looking to have the developer fund those improvements so that’s not a burden I have an expectation we’ll be putting onto our residents,” added Martin.

Colwood is also waiting on a bigger plan.

“We should be using our waterways to move people from a mass transportation standpoint. We live on an island and we’re going to run out of land sooner or later,” said Martin, referring to the possibility of a ferry from the West Shore, a project being looked at by the province’s South Island Transportation Initiative.

The results were set to be released in June but have been delayed because of COVID-19.

The first phase of construction for Royal Bay, starting with the commercial shops, is set to begin early 2021 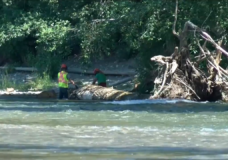 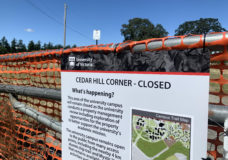