July 18, 2020 updated
CHEK
WatchThe tree, just downriver from the Condensory Bridge, is where two women say they nearly drowned Canada Day when the strong current pulled them under the fallen tree.

A City of Courtenay contractor began the process of removing a dangerous tree on the Puntledge River Friday in anticipation of hot weather and hundreds of tubers that are expected on the river in the coming days.

“I’m very excited, I’m happy that people will be safe on the river,” said Jasmin Moore.

“Excellent move by the city, very thankful for that,” said Rachel Jannati.

Moore and Jannati were back at the river Friday to see the removal for themselves.

CHEK News spoke with them on July 3, just days after a close call with a fallen tree about 100 metres downriver from the Condensory Bridge.

They say they could have been killed that day.

“We tried to paddle away from it and myself I went under and my friend was on top with her tube and I couldn’t get out,” Jannati said in the July 3  interview.

“She proceeded to pop up on my right-hand side and I was just sucked right under,” added Moore.

The strong current that day had pulled their tubes right into the tree which parallels the shore right next to it before they were sucked under.

“I wouldn’t be OK if someone dies there so I knew this had to happen and it couldn’t just fizzle out,” Moore said Friday.

They pulled themselves to safety that day but knew that the tree had to go.

“Many emails, many phone calls were made over the last two weeks and it’s happened,” said Moore.

“You know as soon as we know there’s any issues with the river we’re going to address it as quickly as possible but we do want people to be as safe as possible out there,” said Courtenay Mayor Bob Wells.

Jannati lost her brand new iPhone 11 in the river July 3, however it was just found this week and returned to her. She plugged it in and was delighted to see that it still worked.

The work to remove the tree is expected to be completed this weekend. 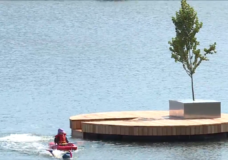 A dock, a floating tree, and a beer: A mystery appears on the Gorge Waterway 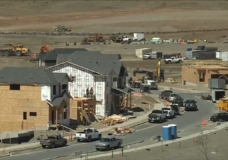