The eye popping art installation is an 800 pound message about the growing feral rabbit problem in Island communities like Nanaimo.

As feral rabbits eat up lawns and parks all around Nanaimo and people walk right on by, a head turning statue is stopping people in their tracks.

“Such an expressive face,” says one woman looking on.

“It asks one question,” says its artist Dale Schulz. “At what point does a cute little creature become a big heavy problem. And that’s symbolized by the steel hammer.”

In the shape of a hammerhead the 10 foot 2 inch tall work of art named “Hungry Bunny” has cost Dale Schulz a whopping $12,000 to build.

“It’s just the right bubble gum shade of pink that I had been looking for,” says the Nanaimo artist admiring the towering piece.

A steel art project he dreamed up nine months ago, after seeing the damage rabbits were doing in his Nanaimo neighbourhood.

“That’s right and I see them in all of the parks and pretty much any institution that has a lawn,” says Schulz.

Nanaimo Animal Control doesn’t deal with the feral rabbits, because they’re not considered domestic animals. So the city is working with Vancouver Island University and the Nanaimo School District, but so far only meeting have resulted as the problem well multiplies.

“Every day it gets worse,” says Schulz.

Residents who saw the “Hungry Bunny” sculpture for the first time Monday, since the public art was just installed in Maffeo Sutton Park Friday weren’t too sure what to make of it.

“I came around and thought oh there’s a really surprised rabbit. Yeah,” says one woman.

“Just to look at the expression on the face you have to smile,” says her friend laughing.

“Comments online have run the gamut from its ugly and will frighten children to this is the direction that public art should take.

Sparking just the conversation, Schulz was hoping for.

“I love it,” he says laughing.

This Hungry Bunny won’t be hopping away any time soon. The public art installation will remain in Maffeo Sutton Park through next May. 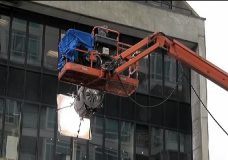 Chesapeake Shores filming, for its second season, in downtown Nanaimo 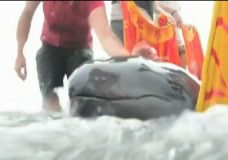