September 24, 2021 updated
CHEK
WatchThe 2021 Tour is a reduced pandemic version of what it is in normal times but still hopes to raise $600,000 for pediatric cancer research. Dean Stoltz reports.

It’s a smaller Tour de Rock team than normal this year but everywhere it goes, riders are treated like rock stars.

The tour of businesses and schools in the Comox Valley Thursday brought with it a consistent message from riders.

“We’re hoping that kids who are maybe going through cancer treatment know we’re on their team, we’re all on a team together,” said Allison Roberts.

The Tour de Rock began in 1998 with the usual 20-plus riders cycling 1,200 kilometres down Vancouver Island and out to Tofino, but it was replaced last year and this year with smaller teams of alumni riders touring around their own communities.

“The magic of tour is still alive and well, all the communities we’ve visited along the way especially here in the Comox Valley have just been incredible,” said tour organizer Tiffany McFadyen. “The schools have rallied for us, the people have rallied for us and it’s really just amazing to be back.”

Chris Kippel is a Courtenay firefighter and former RCMP Auxilliary officer who last rode in 2014. He was inspired to do so after losing his wife to cancer in 2008.

“It’s still a hard thing and I think we’ve all be touched by cancer and whatever we can do to help out the others in our community is why we do this,” said Kippel.

The biggest cheers of the day were for nine-year-old Molly Picard, a Grade 5 student at Aspen Park Elementary School in Comox who had her head shaved in front of hundreds of schoolmates all in the name of raising an incredible $3,700 for the tour.

“My friend Abbey had cancer and she was really brave through it so I just wanted to do it for her,” said Picard.

“Molly has the biggest heart I know and she’s an amazing kid, we’re very lucky,” added her mom Sarah.

The tour continues Friday with rides in Parksville-Qualicum, Port Alberni and Tofino.

To donate or find more information on the ride click here. 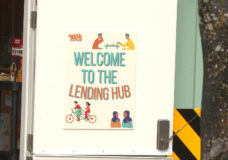 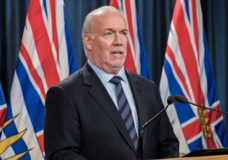