On Saturday, July 27, the father was sitting at home with his family when his wife got the call. Maria Medwedrich was told to get her husband out onto the street outside their Sooke home.

“So I got Carl all ready. He didn’t know why I was getting him all ready,” Maria Medwedrich recalls.

Moments later, with Carl standing on the street, he noticed something he had never seen before. Down the road he could see a convoy of trucks from his company, Coast Environmental, rolling toward him with the drivers honking their loud horns.

Carl’s family says he never cries, but he did that day.

For the last two years, Carl has been unable to work. It started when doctors told him he had an aggressive form of prostate cancer. After surgery and radiation, Carl beat the disease and was able to go back to driving trucks but his return didn’t last long.

“Last year after having all his radiation and chemotherapy he ended up with this awful disease of Lou Gehrig’s,” his daughter told CHEK News through tears. Lou Gehrig’s Disease is also known as Amyotrophic Lateral Sclerosis.

Wanting to do something to show their support, and knowing Carl has been missing his friends, Carl’s son Clinton organized the truck convoy as a surprise.

“He misses everybody horribly,” says his wife.

As the convoy rolled by, Carl began crying but the disease has robbed his ability to speak.

Speaking through a tablet Carl had one thing to say to his friends who took time out of their day to roll by his house: “I love them all like extended family.”

After the trucks went by Carl met the group for photos and coffee at Tim Hortons. His colleagues even helped him into one of the trucks for a photo. 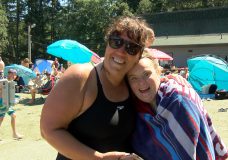 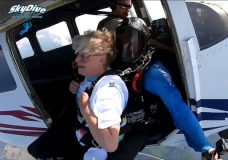