The incident closed the main runway for approximately two hours.

This storm likely is what faced the pilot of a small single-engine plane flying into Victoria International Airport at roughly the same time.

At approximately 12:45, airport officials became aware of a plane in distress, according to the Vice-President of Operations and Development James Bogusz.

“At 12:45 today we had an aircraft emergency. There was a single engine aircraft that landed on our main runway, which we call 0927.”

While touching down, the plane’s right landing gear collapsed.

Miraculously, all three on board walked away from the accident.

“After the three souls who were on board left the aircraft, the Transportation Safety Board made a decision was available to be removed from the airfield. But because that aircraft was on the main runway, it was somewhat disruptive to operations today.”

There were a number of delays, although no cancellations.

At 2:30, the TSB gave the OK to remove the damaged plane.

“Something of this nature is unusual in the sense that we have an aircraft actually having an accident,” says Bogusz. But he adds, “There are declared emergencies from time to time. In which emergency responders may come out on site as a precautionary measure. But it’s not typical that you have an aircraft with a landing gear problem like this.”

Trucks towed the plane to a maintenance building at the airport.
Because it’s a private plane, there is no information on the flight, or passengers. 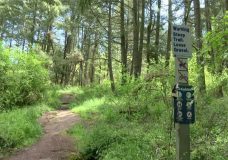