Thousands without power on Vancouver Island as wind wreaks havoc: ‘The storm took out my lower deck’

Thousands of people on Vancouver Island and the Southern Gulf Islands are bearing the brunt of a winter storm as strong winds, expected to gust up to 90 kilometres per hour in some areas, blow across the region Monday.

To the south, outages impacted people throughout the capital region in Victoria, Langford, Saanich, Central Saanich and North Saanich, as well as the Cowichan Valley in Duncan, Lake Cowichan and North Cowichan.

Across the Southern Gulf Islands, around 3,000 customers were without power on Galiano, Pender, Mayne and Saturna islands, as people in Ladysmith and north in Parksville, Courtenay, Campbell River and all the way to Port Hardy were also plagued by outages.

“At the peak, we had about 20,000 customers out throughout the Island. Most of them were in the south part of the Island, the Gulf Islands, Duncan was hit quite hard,” Todd Olynyk, community relations manager at BC Hydro, told CHEK News. “It was a good blast this morning.”

In all, close to 60 outages, predominantly caused by wind, impacted hydro customers, including in North Saanich where video footage sent to CHEK News showed powerful waves clashing with and damaging docks.

“The wind and storm surge took out my lower deck, and I got it on video,” Susan Ko wrote in an email Monday morning. “It’s been a dramatic holiday. What else will nature throw my way?”

The number of customers affected is dwindling, however, as hydro crews work to restore the power with further updates posted on BC Hydro’s website.

Strong winds in the south

The warning was later extended into Tuesday.

“Another Pacific frontal system is approaching the south coast tomorrow (Tuesday). Ahead of the front, southeast winds…will develop over the areas adjacent to Haro Strait tomorrow morning. The winds are expected to ease later in the day,” the weather agency said in an update.

It says in the wake of the second front, strong westerly winds are expected near Juan de Fuca Strait at night.

“King Tides will coincide with the passage of this frontal system. Swells and enhanced wave action along the Strait of Georgia could lead to flooding while wave action and debris may cause damage to coastal infrastructure,” Environment Canada said.

A King Tide is “a non-scientific term people often use to describe exceptionally high tides,” according to the National Ocean Service.

The wind may toss loose objects and cause tree branches to break, leading to potential injury or damage, states the warning.

Potential flooding in the north

East Vancouver Island from Nanoose Bay to Fanny Bay, meanwhile, is under a rainfall warning Monday as total expected amounts of 55 millimetres, mixed in with melting snow, could cause pooling water.

Rain, heavy at times, may lead to localized flooding due to ice-clogged drains, water pooling on roads, high river levels and the potential for debris flow, according to Environment Canada.

In the Cowichan Valley, meanwhile, a caller tells CHEK News that Chemainus Road at Crofton Road (Pinson’s Corner) is closed in both directions due to flooding and, at 10:38 a.m., DriveBC said an estimated time of reopening was not available.

For local residents, sandbags are available for pick up at Russell Farms (2711 Mt. Sicker Road) and the CVRD Bing’s Creek Recycling Centre (3900 Drinkwater Road), the Municipality of North Cowichan said in a news release Monday. People must bring their own shovels.

“Even shallow, fast-moving water across a road can sweep a vehicle or a person away. Don’t approach washouts near rivers, creeks and culverts. Keep children and pets away from creeks and river banks.”

The weather agency urges people to monitor alerts and forecasts by visiting its website and, to report severe weather, emailing [email protected] or tweeting using #BCStorm. 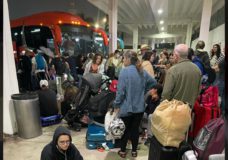 'Hundreds' of Canadians stranded for days in Mexico after Sunwing cancellations 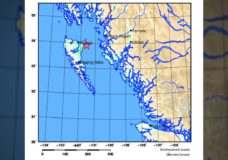