‘Hundreds’ of Canadians stranded for days in Mexico after Sunwing cancellations 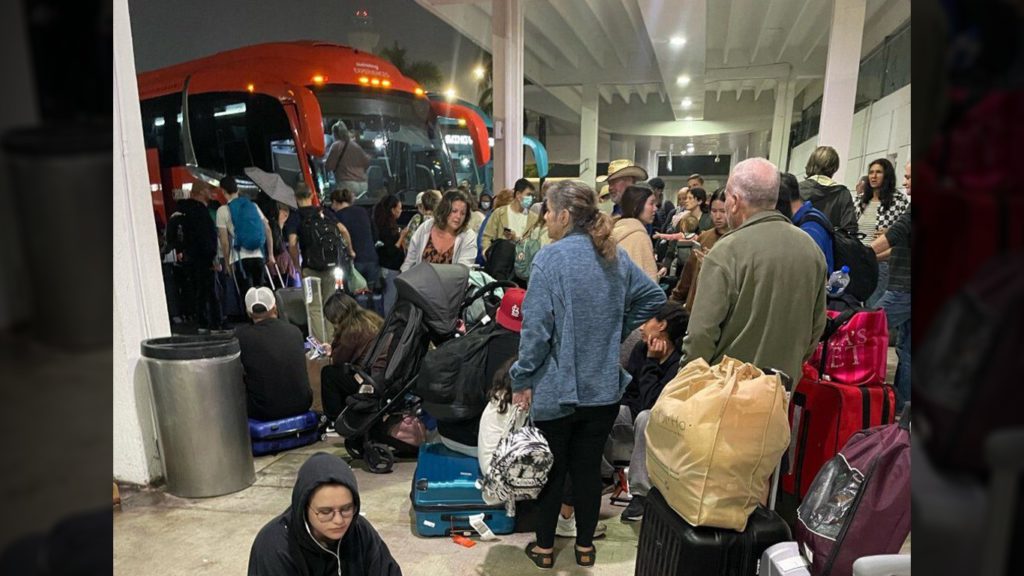 THE CANADIAN PRESS/HO-Hina Itsaso
Passengers are seen in a handout photo as they await transport at the airport in Cancun, Mexico, in the early hours of Dec. 25, 2022, after their delayed flight home to Canada was cancelled once again. Passengers say they've been shuffled from hotel to hotel after sleeping on floors at the airport and in lobbies, and that there's no end in sight to their ordeal.

Hundreds of Canadians are stranded in Cancún, Mexico and don’t know how they’ll get home after their Sunwing flights were cancelled last week.

Passengers said they’ve been shuffled from hotel to hotel after sleeping on floors at the airport and in lobbies, saying there’s no end in sight to their ordeal.

“We just want to go home,” said Tess Friedenberger, who was scheduled to fly home to Calgary on Dec. 22 aboard a Sunwing flight from Mexico. “I never expected us to be in a situation like this, I never thought that it would even be possible. We’re writing to the consulate, we’re writing to hire lawyers, we’re ready to do whatever it takes.”

Friedenberger said in an interview the information from Sunwing has been inadequate and inaccurate, noting many of her fellow travellers are angry and beginning to feel desperate. Video shot by a stranded Sunwing passenger and viewed by The Canadian Press shows dozens of people in the Cancún Airport chanting “Liars!” and “Get us home!”

“There is no help and there’s no one who we can really trust at this point,” she said. “We’re pretty much fending for ourselves.”

Friedenberger left Calgary on Dec. 15 for a Sunwing vacation in Cancún. She was supposed to return home a week later, but she got a notification saying the flight was delayed. Over the next few days, the notifications kept coming, pushing the flight later into the week.

Finally, she and her companion were told their flight would leave on Christmas Eve, she said. But when the time came, she said a Sunwing representative said the flight didn’t exist.

They haven’t heard anything since about when they might get home, she said.

In the meantime, she and her fellow passengers have been shuffled by Sunwing between hotels in Cancun, paying for cabs themselves to get there, she said. The second hotel they arrived at didn’t know they were coming and had no rooms booked for them, she said. People slept in the hotel lobby until finally they were given a bed.

“There were elderly people who needed medication,” she said. “There were children all over the lobby, screaming, crying and trying to sleep.”

When Sunwing directed them to another location on Christmas Eve, some were so distrustful they stayed behind to sleep in the lobby again until they had proof a room was waiting for them, she added.

Sunwing said in tweets on Dec. 22, 23 and 24 that it had cancelled flights because of the severe wintry weather conditions in various parts of the country. Friedenberger said she understands that bad weather can wreak havoc, noting: “We’re Canadians.”

“It’s the lack of communication and the not knowing what’s going to happen and the bouncing around,” she explained. “If you know we’re not going to get home until Dec. 28, that’s fine. Tell us that, and put us up in a room at one hotel.”

Friedenberger said she’s encountered other Canadians stranded in Cancún by other Sunwing flights, and she said they’re coping with the same unknowns.

“There’s plenty more than just us,” she said. “I would say hundreds at this point.”

Cristina Oppedisano said her Sunwing flight home from Cancún to Toronto on Dec. 21 was also cancelled. Like Friedenberger, Oppedisano said in an interview that she and her family don’t know when they’ll get home.

She said she and her group of 10 family members, which includes four children, have also been sent from one unprepared hotel to another, sleeping on airport and lobby floors all the while. She and her family are part of a group of about 100 passengers who were scheduled to be on the cancelled Sunwing flight, she said.

“We’re trapped here,” she said, adding that she, too, has not received any word from Sunwing on when they might get home.

In a statement emailed Sunday afternoon, Sunwing said “a number of northbound flights” continue to face delays as severe weather hampers its ability to move planes and crews to other airports.

The company did not say how many flights were affected.

“Our teams are working hard to re-accommodate customers by subservicing aircraft where possible, in addition to arranging alternate hotels and transfers for those with overnight delays,” the statement said, adding that customers should keep checking their flight status online.

“Our teams locally and in destination continue to proactively manage the situation, and are doing everything possible to return customers home in the coming days,” the company said.

Sunwing did not immediately respond to a follow-up email asking when those stranded in Cancún might get home. 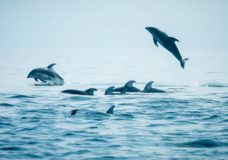 Dolphins delight with return to B.C. waters, but some see 'invasive species' 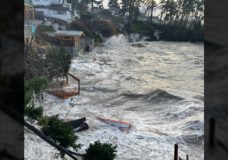 Thousands without power on Vancouver Island as wind wreaks havoc: 'The storm took out my lower deck'