This Week in History: The Butchart Gardens, Bamberton, and the BC Cement Company

At the turn of the 20th century, cement was an essential construction material for British Columbia’s building boom.

It was shipped to the BC coast, in four-hundred pound barrels, via a long, treacherous journey from England.

But in 1904, Robert Butchart arrived on Vancouver Island, and changed everything.

“Robert Butchart [was his name}, and he starts the cement plant at Tod Inlet, and you can almost hear the British guys saying ‘who’s this colonial guy who’s taking away our market?'”

The British company sent their chief engineer, Henry Bamber, to the province to hunt for other deposits of limestone, the essential ingredient of cement.

“He finds limestone just on the other side of the inlet” explains Washington, “so the British company says ‘we can put up a plant on the west side.'”

The British company purchases 450 acres just south of Mill Bay, then ships staff and machinery from Britain, while Robert Butchart continues to mine the east side of the same Saanich Inlet.

The wharf at the new plant is built first, as there is no decent road for transport over the Malahat, and remarkably, the cement plant is built in just 18 months.

Robert Butchart is not pleased.

“It’s going to be head to head combat” says Washington, “between British capital and Canadian capital.”

Until the arrival of the first World War in 1914, and the collapse of the building boom.

As they negotiate the merger, Butchart keeps his cards close to his chest.

“He kept it quiet” explains Washington “that he was really running out of limestone anyway at Tod Inlet.  So there was, I think, a pretty fierce negotiation.”

Robert Butchart becomes president of the new British Columbia Cement Company, “and he realizes” says Washington “that the new plant at Bamberton is much more modern, and they have the limestone there, so they shut Tod Inlet down in the early 1920’s.”

And with that plant shut down, Jennie Butchart begins to plant gardens in the quarry.   Her remarkable vision and determination created the now world-famous Butchart Gardens.

Meanwhile, with the thriving company town of Bamberton named in his honour, Henry Bamber happily returns, with his family, to England.

And for the next 40 years, cement, the construction material that built this province, came entirely out of the BC Cement Company at Bamberton, on Vancouver Island’s Saanich Inlet. 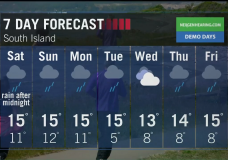 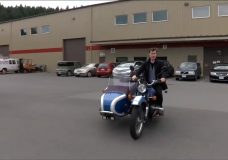